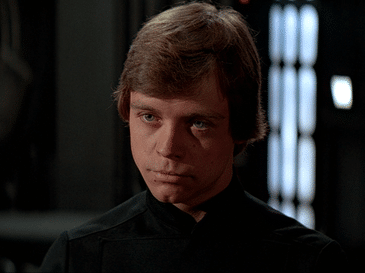 Plot rumors about The Force Awakens are a dime a dozen, and they continue to come fast and furious, despite J.J. Abrams’ and Lucasfilm’s attempts to stifle leaks. One of the interesting potential plot points that people have been mulling over lately is Luke’s ultimate fate: will he remain a force of good? Or will he follow in Anakin’s footsteps and succumb to the lure of the Dark side?

Mark Hamill has stated that he thought Luke would be headed down a Darker path at the end of the original trilogy, but that didn’t play out. Some people think that we could see it this December, but there isn’t much evidence for that. It wouldn’t be surprising to see Disney try to shatter a few people’s expectations for a typical Star Wars movie, but going as far as turning Luke to the Dark side seems a bit unlikely. 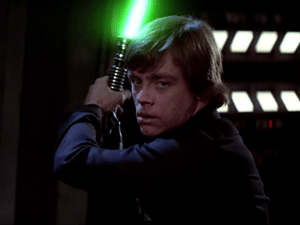 The tension between Light and Dark is always a central part of the Star Wars story—in the original trilogy, it was mostly represented as taking place between the forces of Light and forces of Dark, while in the prequel trilogy, it was played out within a single person. How we’ll see this tension continued in Episode VII could be either of those, or some combination, and Luke seems like a likely candidate for being a conflicted hero that’s tempted by the power of the Dark side.

But to go as far as having Luke turn his back on the Light? While it would certainly be a surprise that would keep audiences enthralled, I think that would be a step too far for Disney and Lucasfilm. Luke and Vader are the quintessential good-versus-evil pair, and always have been. Although Vader isn’t present anymore, he very well may be represented in the movie by Kylo Ren (or in another way), and upsetting that balance by having Luke go over to the Dark would turn The Force Awakens into a very dark movie.

Of course, the prequels had some moments of significant darkness, so it’s not out of the question. But Luke has been a favored hero for almost 40 years. I don’t think we’ll see any big changes in that anytime soon.

What do you think? Will Luke go to the Dark side? Will he be conflicted, or will he be a bastion of the Light? What would you like to see in the upcoming movie? Share your thoughts below!