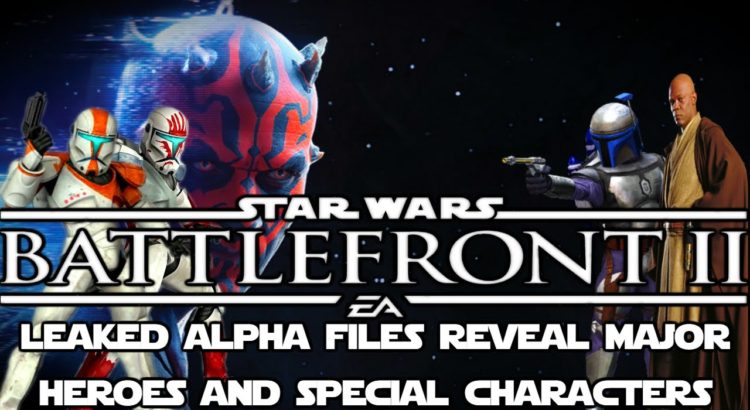 A Battlefront 2 Alpha leaker revealed some really cool stuff about the upcoming game. Some lucky elites were given invites to the closed Alpha for the game and no one really knows much more about what’s going to be in Battlefront 2, but one of those Alpha players has leaked some info via a thread on Reddit.

“Some Battlefront 2 Alpha files were just leaked that contain new Heroes/Villains and special characters! After reading what and who they are I literary can’t contain it!! I’M SO EXCITED!!!!

Here is the next:

“The second part of the leaked alpha files have been released and oh boy am i excited! LAAT! CORUSCANT! God Battlefront 2 is looking better and better the more we see of it. Also the super star destroyer intrigues me… Could this be a new gamemode?? Only time will tell!”

And the final video:

“The final video for my leaked alpha files series. Hopefully we will get more leaks from Uninspired Zebra.. because he’s finding some great stuff lol. anyway this video will show all the weapons, abilities, and gadgets that are in the Battlefront 2 files.”

So, what do you think? It all looks pretty interesting, but keep in mind this is just the Alpha. A lot of things aren’t even in the game yet and it will still undergo a lot of changes between now, beta, and the eventual loss. It’s still fun to take a look at these leaks and see what may be in the future of the game. So based on these videos alone, are you excited about Battlefront 2? Do you plan to pick up your own copy?