LEGO builder Thomas Benedikt has a dream and it is ginormous! He wants to build a 13-ft Lego Super Star Destroyer and he’s using Kickstarter to meet his $15,ooo CAD goal. In case you’re wondering, Lego already offers a 4-ft star destroyer but apparently that wasn’t big enough for Thomas’ dreams.

This is not the first time that Mr.Benedikt has taken up such an effort. In 2009 he build a 7ft long, 30,000 piece Mon Calamari cruiser from Episode VI: Return of the Jedi.

Some Statistics of the proposed effort: 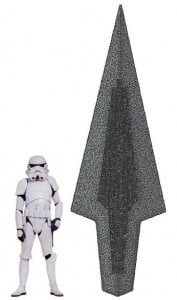 Yes – that’s an actual 5″11 stormtrooper against the proposed structure!

As of the moment of this writing, the Kickstarter effort has gathered $726CAD out of the required $15,000CAD.

You can support the effort by donating at the project’s Kickstarter page.