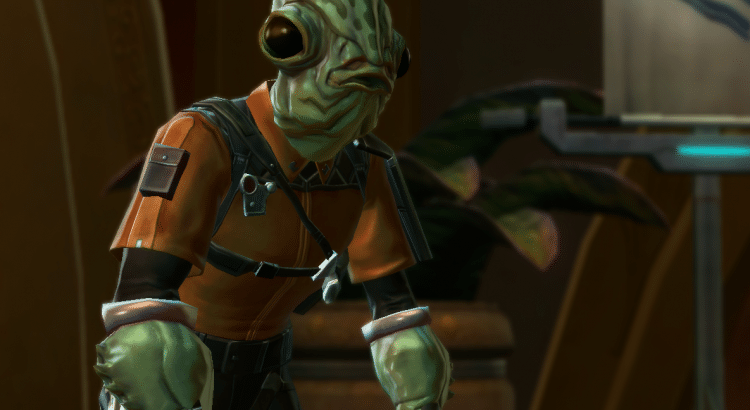 An amphibious species with fishlike faces and huge eyes, the Mon Calamari are among the galaxy’s most peaceful and intelligent beings. They are a colorful species, with skin tones ranging the full spectrum of known hues. Many Mon Cal are also marked by vibrant spots or stripes.

The Mon Calamari are native to a watery world of the same name. They can survive underwater for long periods of time and are powerful swimmers. The Mon Cal are also psychologically attuned to their environment. When visiting wet, cool planets they become very energetic and cheerful; in contrast, they may be quite depressed and languid on hot, dry worlds. The idealistic Mon Cal enjoy a progressive society that promotes the values of justice and peace. They are tireless explorers, but seek out other planets for knowledge rather than conquest. As individuals, they may seem soft-spoken, gentle, determined, and generous. They control their emotions well and have a nearly superhuman capacity for intense concentration. More impulsive species may view the Mon Cal as extremely stubborn. Mon Cal speak Basic and Mon Calamari.

Throughout the galaxy, Mon Cal are probably best-known for their great scientific knowledge and mechanical aptitude. In particular, they are widely respected for their striking starships, each a unique fusion of art and engineering. But Mon Cal certainly aren’t limited to intellectual pursuits; they can also apply their great intelligence to exploration, tactical combat, and even complete mastery of weapons.

The Mon Calamari share the same homeworld as the Quarren. Many xenobiologists believe the Mon Calamari are descended from squid, but evolved a more humanoid appearance than the Quarren. The males have salmon-colored skin, lobed heads, and protruding eyes. The females are more streamlined, with olive-colored markings on their salmon skin. An amphibious species with fishlike faces and huge eyes, the Mon Calamari are among the galaxy’s most peaceful and intelligent beings. They are a colorful species, with skin tones ranging the full spectrum of known hues. Many Mon Cal are also marked by vibrant spots or stripes. The Mon Calamari can survive underwater for long periods of time and are powerful swimmers. The Mon Cal are also psychologically attuned to their environment. When visiting wet, cool planets they become very energetic and cheerful; in contrast, they may be quite depressed and languid on hot, dry worlds.

History
Circa 4,500 BBY, the Mon Calamari were attacked by the Quarren leading to the devastating Quarren War. The Mon Calamari, though less aggressive by nature, had much better technology, and won the war. In order to prevent future wars, the Mon Calamari took hundreds of young Quarren prisoners, taught them the ways of Mon Calamari civilization, then set them free. After the re-educated Quarrens gained control over Quarren civilization, peace between the two peoples continued for centuries (though it was sometimes a tense relationship). After the initial confusion had passed between the two races, the Mon Calamari formed a symbiotic relationship with the Quarren which resulted in a golden age engulfing their planet. As the Calamari began to advance technologically, they started to construct floating cities which became government, learning and cultural centers. 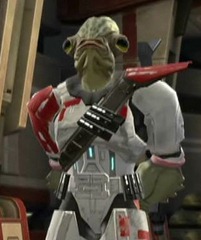 The Mon Calamari had always been explorers, even from their earliest records, and wanted to explore the stars. As part of their desire to reach the stars, the Mon Calamari along with their Quarren partners created a program for their slow expansion into space. This started with the creation of a ring of habitats as well as science laboratories from which they could further chart their mission. For over a century, they developed their understanding of zero-gravity as well as starship propulsion before they were ready to take the next step of their journey.. It was the Mon Calamari mathematician known as Q-Viza who invented his species cavitation hyperdrive technology which, whilst slower than the Corellian equivalent, allowed his species to establish colonies on worlds such Hinakuu in the years between 4,400 BBY to 4,200 BBY. What followed was early starliners being launched to nearby worlds where they colonized the planets Mantan and Ruisto as well as established an asteroid mining operation that was overseen by the Quarren who refined metals to supplement the construction efforts of the Mon Calamari. This wave of expansion led to the development of the rough boundaries of what became known as Mon Calamari Space though their expansion was limited due to both practical as well as psychological reasons.

Joining the Republic
It was during this peaceful era of expansion that first contact came with the Galactic Republic in 4,166 BBY, just prior to the Great Sith War. This was when Republic scouts made contact with Mon Calamari starships at Ruisto. Before this time, the Republic was aware of the existence of the Dac system through probes but deemed it too far from known space for further expansion. As the two civilizations made contact with one another, the Mon Calamari showed their eagerness in learning more of the vast Republic as well as its great knowledge of the galaxy. Their Quarren cousins, however, were more cautious and urged discretion. The Mon Calamari and their homeworld remained a mystery to the Republic over the years due to outsiders being unwilling to interact with the inhabitants as they were constantly on the brink of war. While there was contact between the two, relations were not solid between the two races as the Mon Calamari were reluctant to trust those from off-world.