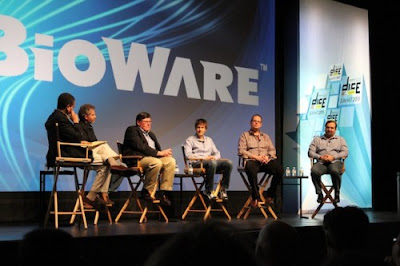 Co founder of BioWare Greg Zeschuk did a public Speaking at the DICE summit in Las Vegas yesterday. Here he confessed that World of warcraft has set the standards for any MMORPG. and that the developer’s own offering, Star Wars: The Old Republic, looks to it for “standards”. Furhtermore he doesn’t see SWTOR as a WoW-killer. The players will decide if SWTOR will become a succes: “It is a touchstone,” Zeschuk said of WoW, according to GamesIndustry. “It has established standards, it’s established how you play an MMO:

Zeschuk also admitted that it will be an “interesting challenge” to compete with World of Warcraft, noting the MMORPG’s overall size in regards to its international reach and the yearly revenue it generates from subscribers and in-game purchases worldwide.

“In some ways they [Blizzard] cracked this market wide open,” he said. “”Obviously Star Wars is a very big license and it’s something that when done right–and it’s something we did right with KOTOR (Knights of the Old Republic) years ago–it’s an incredible force multiplier on your efforts. We’ve added things so that anyone that plays it knows it’s a BioWare game.”””””””””””

BioWare’s apparent take on Star Wars: The Old Republic is to launch an established, stable realm in the market rather than unleash a Star Wars-based mammoth (Bantha) out to take down World of Warcraft and other MMOGs. “The audience will tell us if we have a place,” he said.

Also present on the keynote panel was Blizzard’s Mike Morhaime. He told Zeschuk to “do a good job” with the Star Wars MMOG. His take is that The Old Republic may bring in MMOG “virgins”– those that previously never considered playing a subscription-based MMOG. If those new players try BioWare’s epic and walk away discouraged because of bad gameplay or instability issues, they may not give the genre another try. Naturally if The Old Republic rocks and new players decide they’re newborn fans of MMOGs, Blizzard and other publishers/developers will likely reel in a new customer in the long run.

“”BioWare is a great developer and obviously Star Wars is a very strong license,” Morhaime said. “””””””””””We think it’s good for the MMO genre for additional MMOs to come out that are actually fun and good to play. I don’t know that it serves the genre very well when MMOs come out and have all sorts of problems and players leave in frustration.”

One thought to “Greg Zeschuk: World of Warcraft established the MMO standards”

Killing in the name of