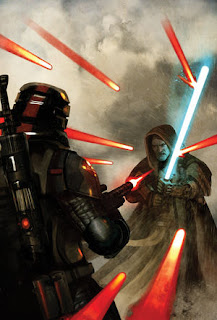 Dark Horse had good news for Star Wars comic fans recently. Not only will the Star Wars comics be available in digital format but they also released a small preview of each of the remaining two issues of Star Wars: The Old Republic: The Lost Suns series, Issues #4 and #5.
They are available for pre-order but previous issues sold out super fast so don’t wait if you want to get your hands on these comics for yourself.
Here is info from Dark Horse on each new issue:

Star Wars: The Old Republic: The Lost Suns Issue #4
Captured by the evil Sith Empire, Republic spy Theron Shan is about to find out what secret sacrifice brought about the end of the great war. But once the Imperial’s covert activities are revealed, will he be able to act on his devastating discoveries?

Star Wars: The Old Republic: The Lost Suns Issue #5
Republic spy Theron Shan puts all he has into surviving–and stopping–the Sith’s star-killing Sun Razer. This megaweapon must be destroyed and the Republic must be warned of the threat!

Are you following this comic series like us? Drop us a line and let us know what you think!
0
SHARES
ShareTweet