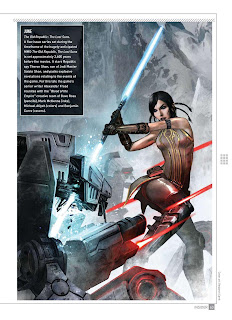 The new issue of Star Wars Insider reveals a new Star Wars: The old Republic comic called “The Lost Sons” from Dark Horse. The comic will apparently be out in June this year.

The Old Republic: The Lost Suns. A five-issue series set during the timeframe of the highly-anticipated MMO The Old Republic, The Lost Suns is set approximately 3,600 years before the movies. It stars Republic spy Theron Shan, son of Jedi Master Satele Shan, and packs explosive revelations relating to the events of the game. For this tale the game’s senior writer Alexander Freed reunites with the “Blood of the Empire” creative team of Dave Ross (pencils), Mark McKenna (inks), Michael Atiyeh (colors), and Benjamin Carre (covers).