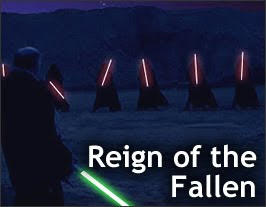 Reign of the Fallen is a Star Wars fanfilm directed and written by David McLeavy, and originally released in March 2006.

In the times since great wars laid waste to Prias, its people have learned to embrace a simple life, away from the perils of technology and war. As the mighty Sith army spreads across the galaxy, subjugating every planet in its path, all the people of Prias can do is wait, their world protected by an energy planetary shield held in place by ancient towers. While the people wait in fear, one Jedi trained by Master Oram Bren will be chosen to be the future leader of Prias, a title decided by a vote of the entire population of the planet. But little do they know that one Jedi’s dark secret could spell their doom.

Reign of the Fallen is an independently produced film based on the Star Wars universe created by George Lucas. This movie is made solely for the love of all things filmmaking and is not for monetary gain. Everyone involved in the making of this movie worked completely for free, rewarded only by the experience and the chance to meet other people who share the same passions.

The idea for Reign of the Fallen started as a 10 minute fight scene back in Fall 2003, but later evolved into a 60 minute epic undertaking. Inspired by the work of the fan film community, writer/director David McLeavy and producer Jonathan Wang set out to make a unique film, one that paid homage to the Star Wars universe they knew and loved, but was shown through their own eyes in their own filmmaking style. It would be a project that would provide plenty of opportunities to test their theories of what could be possible in a small production attempting to tell a mammoth story.

By early 2004, pre-production was well under way, with props being crafted in Kentucky, location scouting commencing in New Jersey, and casting calls being placed throughout the internet world. After a long casting period, several actors were cast based on their wonderful presence, talent, experience and training. By August of 2004, cameras were ready to roll.

Shooting began in the last week of August and continued through November, largely constrained to weekends and the participants’ availability. On days when no one else was available David McLeavy and Jonathan Wang would go out on their own, picking up “2nd Unit” shots and even a few entire scenes with no other crew to be found.

By November, much of the film had been shot, including the crew’s biggest challenge: an extended night sequence featuring a lightsaber fight in a torrential downpour. Despite frigid weather, equipment malfunctions and an intimidating shot list, the fight was completed over five nights that often started at 8pm and lasted until 4 in the morning.

With a chunk of exterior scenes and night sequences still left to shoot and Winter looming in the near future, shooting was shut down until spring. During this time, post-production was put into full gear, with effects shots and editing taking up most of the filmmaker’s spare time.

By March of 2005, they felt they were ready for the final stretch. The actors were brought back for a second round of shooting, some traveling 2 hours both ways to make their call times. By June, shooting was deemed completed and a screening was scheduled at the Thomas Sweet Outdoor Cinema held every summer. The screening was a success and the turnout more than the filmmakers expected.

All seemed well… But director David McLeavy had a few ideas brewing in his head. Based on feedback from the screening and his own critique of the film, he decided another round of shooting could make the film that much more complete. Thanks to the unwavering dedication of his cast and crew, more scenes were shot, from grueling action to the smallest inserts, to refine and polish the film as much as could be done.

Then, finally, four days before its next screening, Reign of the Fallen was finished and ready for the world. It has been a long and arduous task, filled with long nights, dragging equipment to remote areas, and combating the cold while trying to keep focused on the task at hand. Thanks to the help and support of friends, family, and the professionalism of everyone involved, the project has been a success. We hope you enjoy the fruits of all this labor, and wish you happy viewing.