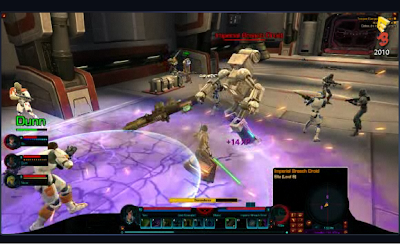 This week’s Friday update brings us a Multiplayer Demo from E3. This demo is an edited versino of the Video G4 hosted a few weeks ago. In this first-glimpse video Dallas Dickinson, the Director of Production, examines the core roles for SWTOR group missions. Dickinson explains the possible functions each class can have: the Trooper can be a tank, the Jedi Knight as an off-tank, the Jedi Consular works primary healing, with the Smuggler covers the DPS and alternate healing.

Commander Narlock readies his troops for an Imperial assault. As he does, all four Republic classes; a Jedi Consular, Jedi Knight, Smuggler, and Trooper join together to assist in fighting off the attack. Watch as each player does his or her part to take on the enemies, and beat the Imperial Troopers and Imperial Breach Droids.

Is it just me, or is anyone else concerned about the “class = role” aspect?

I know most MMORPGs have this element to some degree, but it does seem pretty hard-and-fast in Star Wars : The Old Republic, doesn’t it?

If you are a Consular then you are /automatically/ the group healer, and so on.

Again, I know that most other MMORPGs do this, but a lot of the other, newer ones tend to have a little more flexibility; you can build and tweak your character somewhat, and have different skill and ability emphases than the default..

Why does this worry me? Because I hate it when you’re trying to form a group in-game, and you can’t get into the action because if you don’t have a Healer (a Consular, in this case) or a main Tank (a Trooper, here) and you’re basically destined to fail.

In this scenario, the other character classes aren’t designed to be flexible enough to cover the gaps in the line-up, even if they work together.

I know SW:TOR is offering build-path choices within each class, so maybe I’m worrying for nothing. I hope so. I’d hate to have to slow down my game experience while my group was forced to go “Looking For Consular” for an hour, or more before we could take on a group mission.

Beyond this, I like the “conversation instancing” rings. Looks like a smart way to handle and direct group-interactive dialogue with multiple players.

And the art? I’m not worried yet; final art passes are typically the last things done on a game before it ships, because they’re essentially cosmetic additions, unnecessary while game-building.

I expect SW:TOR’s fundamental design style won’t change, but I expect it /will/ look much shinier on release.