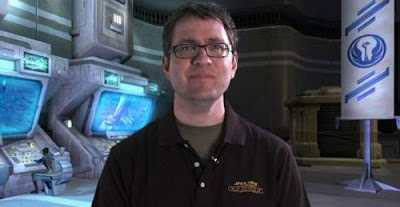 MMORPG has an interesting interview with Dallas Dickinson for your enjoyment as you count down the days to SWTOR launch- coming oh so soon!

MMORPG.com:Let’s kick things off by talking a bit about Game Testing. The last few weekend tests have seen a huge amount of players hitting the servers. What can you tell us about what you’ve learned from having so many users hitting your service? Were there any surprises or revelations in terms of what the service will be able to handle?

Dallas Dickinson:There were actually, there were mostly positive surprises. There were way fewer surprises than we were bracing for. The servers actually did really, really well. Those who participated in the testing found the experience was relatively smooth. I think, the first night, we had some pretty big queues and we had some queuing technology that we just wanted to tweak, and so we got that working really well. We had a little bit of instability, but nothing resembling what we were expecting. So, actually, the service stood up really, really well, with hundreds of thousands of players. So, it actually braced us quite well for launch.

We love interviews, especially those with BioWare staff because it gives us more insight into the game and the behind-the-scenes action that takes place when it comes to making a game. You can read this complete interview over on MMORPG.com to see everything else that Dallas Dickinson had to say to the crew over at MMORPG.