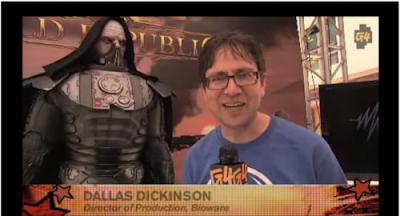 There’s lots of cool stuff coming out of San Diego Comic Con this week, part of which are great interviews with Dallas Dickinson, Director of Production on Star Wars: The Old Republic. The first, with fansite TORWars, has a lot of great information. Here he discusses some of the reveals from SDCC such as the speeder bikes, the model they are based on and the fact that they are now tweaked so that the rider does not get knocked off so easily (although it is still possible to get knocked off).
While he could not go into a lot of detail, he also talked about the customizable companions and teased about some new changes such as being able to interact with the companions and control them during combat scenes in the game. To what extent this will be, we do not know yet but he says it will be released more in the coming weeks.
Check out the full interview here:
Another interview done by G4TV talks about the story, background and feel of Star Wars: The Old Republic. This is from the SWTOR Panel at SDCC and while much of it is info the hardcore fans already know, it also refers to the elusive and much-anticipated release date that everyone is super excited to hear about. This one’s worth a watch as well, and it’s a great one to pass along to your friends who may not yet know why you cannot shut up about SWTOR.