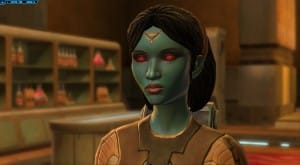 It’s that time of week again and the BioWare crew were back to us with answers to the community questions. There are some really great questions coming out lately and this time they have announced that it will be 2 weeks (May 25th) before we get our answers to the next set of questions, in order to allow for more time to fully answer the questions.

They also said this week:

We have now opened an official thread for that week’s Q&A, which will stay open until 2pm CDT on May 22nd, 2012 (12pm PDT/3pm EDT/8pm BST/9pm CEST/5am AEST). We welcome your questions in that thread and hope you enjoy the answers below.

So now let’s move on to the questions.

nakomaru: You have mentioned DPS, healing and tanking “targets” as objective methods of balancing the roles in the game. Are there hybrid targets (e.g. healing & dps spec) as well? It seems some hybrid specs are viable on certain classes and out of the question on others. I suppose this has to do with objectively balancing lower tier skills across the classes.

Austin Peckenpaugh (Senior Designer): Yes and no. In your example of a healer and DPS hybrid, by and large, whatever damage you sacrifice you should pick up in healing. For example, if you gave up 10% damage, we’d expect you to pick up 10% healing. Sometimes that’s the case, but sometimes you lose or pick up synergies that move you above or below an even shift. Because “hybrid” in our skill trees means “virtually any combination of points,” it’s certainly not the case that we have targets for every combination. However, we do have expectations, and we’re happy with hybrid builds so long as they don’t radically stray from our expectations.

Freeborne: Alacrity as a stat seems to be encouraged in “Energy Based’ classes (Troopers/Smugglers) through our talent trees. However, Alacrity seems to be a terrible secondary stat for us. The faster we use abilities, the faster we lose our energy – and the less energy we have, the less energy we regenerate. Are there any plans to review Alacrity, or at least its place in some class talent trees?

Austin: I agree. We’re exploring ways of improving Alacrity that we hope to get working for a future Game Update. As much as I’d like to, I can’t provide details on this plan yet. It’s possible that we’ll address passive Alacrity boosts in the skill trees, but those changes need to be solid and work for the long haul; it would be unacceptable to have a ‘temporary’ skill in place that we planned on removing at a later date.

Deewe: With the locked companion specs, some of us feel like being forced to use specific companions versus choosing them for their personality and look. Is there in the works any kind of feature mitigating this issue (hint: companions kits)?

Daniel Erickson (Lead Game Designer): Companions in BioWare games have always been fully developed characters with their own backgrounds and skills. While you can change between a couple different approaches with each, we do not presently have plans to make Companion Characters interchangeable.

RKLimes: I recall a developer post indicating the results of transferring a character with a Legacy from one server onto another where a Legacy also exists, the highest level legacy would simple be applied rather than added. Since higher Legacy level does not necessarily equal greatest number of Legacy unlocks, will any and all unlocks be granted from either Legacies, or only those of the highest?

Daniel: Legacies will be merged in the most advantageous possible way for the player. They’re your rewards, you earned them, we don’t want to prevent you from moving them wherever you like. So any unlocks gained by the character you’re moving will come with that character, even if the Legacy they are moving into is a lower level.

Rickety: I’m currently the Division Captain for The Old Republic within The Older Gamers community. I am responsible for multiple guilds spanning all three regions. Several of our guilds have issues with the current guild limit of five hundred Characters. Are there any plans to increase this limit or alternatively, to introduce an in game ‘Guild Alliance’ system?

Damion Schubert (Principal Lead Systems Designer): We’ve definitely talked about an ‘Alliance’ system, and even thrown around a basic design. This feature is lower in priority than some other guild needs, though, that were identified at the Guild Summit.

Visit the official post to read the rest of them, including questions about Huttball advantages, removing vendors from warzones, moddable offhands, PvP crafting gear, and more.

So what do you think? Do you like the questions that were asked? Agree with the answers? Have a question of your own?