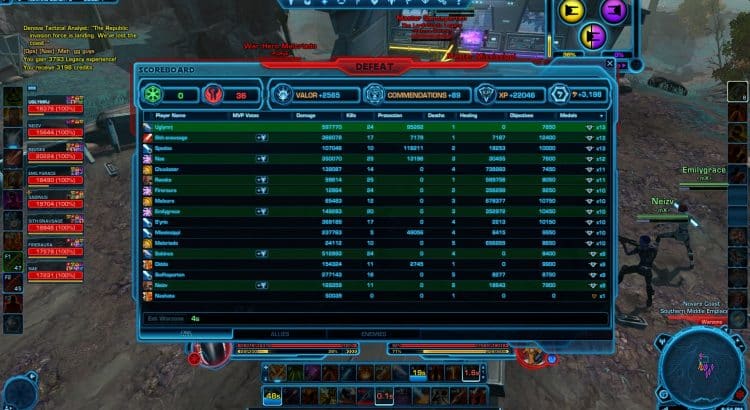 Eric Musco posted a pretty lengthy blog post on exactly how the developers try to reach optimal class balance in Star Wars: The old Republic. Quite an interesting read if you are into PVP:

Over the next few weeks, as you know, it is our plan to give you specifics on upcoming Class/Discipline changes. One things that we have never done before is really get down in the trenches and explain how we balance Classes. With our continued move towards more transparency, we really wanted to lift the hood and provide as much context as possible for those changes. Below you will find an elaborate breakdown from our combat team on not only how they balance Classes, but why. I highly recommend you read the entire post (I know it’s long!). For the non-reader among you…

TLDR – We do not balance Disciplines against each other directly. Balance is based on target values which are determined by what type of damage dealer you are; ranged, melee, burst, sustained, etc.

Here is the detailed breakdown from the combat team:

Quote:
Opening note, for anyone who might not be familiar with the abbreviations and terminology used in this post:

Before we dig into the details for any Classes or Disciplines that will be seeing damage or healing “nerfs” in 5.3, we wanted to take a moment to share a bit of our Class design philosophy with you. Whenever we “nerf” the damage or healing a Discipline can produce, it is not because we compared them to other Disciplines and thought that they were too good. Likewise, we don’t “buff” a Discipline because we think they are not as good as the other Disciplines and need a boost. We do not play the Class comparison game for damage, healing, or tanking changes.

The deeper reason for a “buff” or a “nerf” lies in a Discipline’s ability to perform at their target DPS (for damage dealers), HPS (for healers), or DTPS (for tanks). The target DPS, HPS, and DTPS values determine which content (Veteran Operations, Master Uprisings, etc.) players can successfully complete in a given set of gear. And in PvP situations, they determine the speed of player kill times and the ability for healers and tanks to extend the life of an ally under attack. So to clarify, there is a comparison that takes place for damage, tanking, and healing balance, but that comparison is not among Disciplines or Classes – it is between the target DPS, HPS, or DTPS value and the Discipline in question.

Due to the variances with the item rating of the gear your character has equipped and the augments, Class buffs, stims, and adrenals your character may or may not be using, we are not providing you with a set number for any target values. Also, these values are average values. Every damage, tanking, or healing parse tends to be unique, and sometimes those parses can stretch quite high or low for several different reasons.

That said, we do have something a little special which we would like to share with you today: damage grouping categories. With no further ado…

Melee Quasi-Burst Damage Dealer (up to +2.5% of target DPS)

Ranged Quasi-Sustained Damage Dealer (down to -2.5% of target DPS)

Ranged Burst Damage Dealers (down to -5% of target DPS)

Now let us explain the theory behind the planned differences for the damage groupings above. There are really only four sub-categories we use in order to classify a damage dealer: Melee (meaning short-range), Ranged (meaning long-range), Burst (meaning immediate or quick damage), and Sustained (meaning damage over time or slow damage). We feel both Melee and Sustained damage types are inherently disadvantaged, and that is why Melee Sustained damage dealers (with their two inherent disadvantages) make up the top grouping. Melee damage is disadvantaged because it must stay close to its target (often within four meters) in order to maximize damage output, and Sustained damage is disadvantaged because it takes several seconds to ramp up to its full damage potential each time it acquires a new target (and in situations where rapid target switching is required, it will often never reach its full damage potential).

Another thing about the damage groupings above that might be a little confusing is the reference to “target DPS,” so let us give you a fictitious example to help clarify our meaning. Remember, target DPS varies based on your equipped item rating and any augments, Class buffs, stims, or adrenals that you may or may not be using. For ease of calculation’s sake, we will say the fake target DPS for our example is 10,000. With 10,000 DPS being the target value, that would mean a Rage Juggernaut / Focus Guardian should average 10,000 DPS in a fight against a single target that lasts about five minutes (because they fall in the “at target” damage grouping). In the same fight, a Pyrotech Powertech / Plasmatech Vanguard should average above that target DPS, up to 10,500 DPS (because they fall in the “up to +5% of target” damage grouping). A Virulence Sniper / Dirty Fighting Gunslinger performing in this same scenario should average below that target DPS, down to 9750 DPS (because they fall in the “down to -2.5% of target” damage grouping).

Before we move on from this topic, we want to note the point about the fight lasting around five minutes is rather important. In a much shorter fight, the bursty Rage Juggernaut / Focus Guardian might have higher DPS than the Pyrotech Powertech / Plasmatech Vanguard, because it takes a while for the latter’s sustained damage to ramp up to its full potential.

Okay, so now you might be looking at the groupings above and scratching your head thinking, “That’s not AT ALL where my Discipline is!” If so, you might be correct (depending on which Discipline you play). In fact, that is precisely why we do Class balance changes: to fix things that often fall out of balance when we do something like a level increase or push out new abilities and skills. Achieving the damage groupings above is the goal of our Class balance changes beginning with 5.3 and continuing in the patches beyond it as necessary, until the damage grouping balance above is a reality in game and not just on paper.

At this point, you might be wondering how we decided which Disciplines to balance first. We used several factors including player feedback, player parsing data, and our own internal PvE and PvP statistical data. For 5.3, we focused on the Disciplines we felt were most out of line with the rest of their damage groupings. That gave us the Virulence Sniper / Dirty Fighting Gunslinger, Engineering Sniper / Saboteur Gunslinger, and Innovative Ordnance Mercenary / Assault Specialist Commando on the overperforming end and the Pyrotech Powertech / Plasmatech Vanguard, Hatred Assassin / Serenity Shadow, and Madness Sorcerer / Balance Sage on the underperforming end. If you are wondering whether Arsenal Mercenary / Gunnery Commando and Corruption Sorcerer / Seer Sage got “nerfs” or “buffs,” well… just have another look at those damage groupings and take this hint to heart: it is the same story for Corruption / Seer healing as it is for Arsenal / Gunnery damage.

Lastly, you might also wonder why there are not more changes to utilities and survivability for damage dealers in 5.3, and that is a fair question. We are first focusing on the damage and healing output for all Classes before getting too carried away with utility changes. This is because opinions about where a given Discipline stands among the pack can be clouded by high or low damage or healing output without anyone even realizing it. That is not to say we won’t tweak a utility here or there, but before we go making massive changes to a class’s utility toolkit, we want to make sure the damage or healing they can put out is on target and relatively similar to other Disciplines in their grouping. Once we are happy with the damage output, we can start adjusting utilities to give those that need it a boost and others that are too powerful a reduction.

We hope this glimpse into our Class design philosophy helps you understand the changes we are making and the rationale behind each decision.

One thought to “SWTOR: How Class Balance Happens”