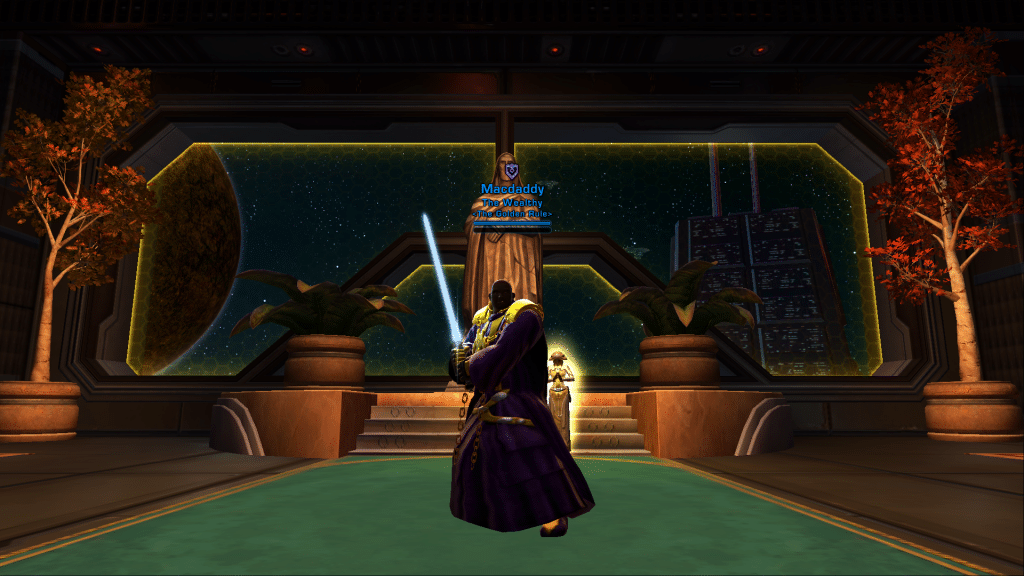 Tait Watson got the Combat team to write an in-depth explanation of the Bolster system. I’m raelly starting to like this bird. You can read the whole thing in it original here, or our copy paste below. If you ask me, bolster still a bit broken, its still way better then the recruit gear system they previously had, Personally I would like to see it in a place where people that did end game pve could use that gear for pvp and have it be perfectly viable. The fact that a set of 66 blue’s are better for pvp then full dreadguard is lame.

Hey gang! I know a number of people have been waiting on a post about some more specifics on how bolster works and interacts with items and the regular stat system, so I thought I would try to bring a little light to what is one of the more complicated systems we have in ToR. I think it is easiest to go through (a slightly simplified version of) the process the bolster system goes through when you enter a warzone and become bolstered. Note: Along with all of the item specific stuff that I’m going to explain, Bolster also increases a character’s level, granting some base stats and increasing the rank of player’s abilities to be competitive. For the sake of trying to keep the post to a readable size (and because I think people mostly just care about the item portion of the system) I’m going to skip talking about the specifics of that process. The short version of that process is: if you aren’t 55, we make you 55 and give you all of the baseline stats that you would have gotten between the level you are and the 55, and then we throw some extra generic bonuses at you to make up for the fact that you don’t have all your abilities and skill points.
To start, some quick notes on terminology here:

The Basics:
Bolster relies on the idea that we are trying to boost players up to a certain item power level, abstracted to a number we call item rating. This item rating effectively determines how much stat, armor value, weapon damage value, etc., is given to a particular item. At the most generic level, the bolster system looks through each individual item slot a character has equipped, and if that slot is below the target item rating it gives the character enough of PvE stats to make up the difference along with a full complement of expertise (assuming the item doesn’t have any expertise to begin with). Any item that has a higher rating than the target item rating receives no PvE stat and a smaller block of expertise.

The Specifics:
For each particular item slot, the Bolster needs to figure out what the rating of that slot is. To do this, it takes the weighted average of the ratings for each mod that exists on the item (if it is a modded item), or the actual rating of the item (if it isn’t a modded item). The weight given to each mod is directly relative to the amount of power each mod is given in the item system, which for all of the non-crystals is identical in ToR. Crystals have a significantly smaller power budget, and so don’t have as much of impact on the rating average as a “normal” mod. Once the system has the item rating for that slot it combines that data with how a character has spent his or her skill points (to help determine what kind of roll a character wants to play), and generates a baseline set of stats that it assumes the character has on that particular item and a set of bolstered stats it should have at the target bolstered item rating. The system then simply gives the character the difference between the assumed baseline set and the bolstered set of stats. For specifically the expertise stat, there is an extra step: if the item already had any value of expertise, then we totally ignore any amount of expertise that we should add regardless of any rating difference.

The amount of stat we define at each item rating level follows the exact same item creation formulas that our item guys do, and we do our best to assign out those stats to what we think an average player of that particular class/advanced class/skill tree would like in a ratio. In a perfect world, you could take a full set of item rating 100 gear and a bolster effect to 100, and you have totally identical stats if you modded the items in the same we selected stats for bolster.

This is all well and good for items that have ratings below our targets, but what about items that are above our target! Any item that results in an averaged item rating above the bolster target rating gets absolutely no PvE stats added, but it can still get expertise. See the next section for Expertise info!

Expertise (Does a Body Good):
Expertise is a multiplicative stat that only applies when you are in PvP combat. It has 3 systemic effects: it increases damage done by a %, it decreases damage taken by a %, and it increases healing by a %. Because this is a multiplicative stat, it means that in PvP, a player with much lower PvE stats but with a higher multiplier can result in a more powerful character in PvP versus someone with higher PvE stats but worse (or no) multiplier. A simple and extreme example of this would be a player who hits for 50 damage with a x6 multiplier (for 300 total damage) versus a guy who hits for 100 damage but with only a 2x multiplier (for 200 total damage). Even though Player A’s base damage is significantly lower than Player B’s base damage, in PvP he is way better off. This allows us to set an overall power level range for PvP (with the floor being a full bolstered character and the ceiling being the best augmented PvP gear) and we can insert PvE gear inside this range wherever we want simply by modifying how much expertise that gear receives. As your PvE gear gets more and more PvE stats compared to the PvP gear set, we remove expertise to keep the power of that gear in check. The result is that we can ensure that PvP gear is always better than PvE gear (in PvP), regardless of the purely PvE stat differentials.

I hope this brings some light on just how the bolster system actually works, and I imagine it will spawn a number of follow up questions. We will try to answer what we can.