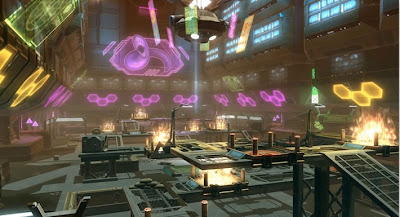 At the Eurogamer Expo 2011, TotalBiscuit was able to play a game of Huttball using the Jedi Sentinel class, a heavy melee damage dealer. As always “The Angry Brit” has some awesome commentary good for a laugh. The video is filmed at 25fps, 1080i resolution, so it’s really decent footage.

TotalBiscuit has commented a few times about the game, here is one of the most interesting points:

There is a scaling issue, far as I can tell, due to how PvP works. At lower levels, you have too much health and not enough damage. Bioware is aware of it and they’re tweaking it, but it’s particularly frustrating with melee classes. If I’m chopping you up with a lightsabre, you should probably die. With the Trooper I can stand at range mowing fools down with area of effect sprays, grenades and such, plus I can take a beating up close and do massive damage with Stock Strike, so that’s less of an issue.

And if the critics wanted to run their mouths, they should get jumped instantly to level 14 on a class they’ve never played, on their first time in the map, play it on an unfamiliar laptop, while having 25 or so people standing behind you watching, while commentating live. Then they can talk 😉 What can I say? Some of us play life in Nightmare-mode.

The fire is there for a specific reason, it is the quickest route to the touchdown line, but also the most risky. It doesn’t warn you when the fire is going to go off, you don’t move very fast with the ball, you can risk going through the fire area and if you time it right, you can get a touchdown since enemies can’t follow you without dying. If you time it wrong, you’re toast, there is noway to get out of it fast enough, it does too much damage in too short a time. “Stay out of the fire” is not a principle that applies in Huttball, it’s there because it WANTS you to risk that route, because the reward should you pull it off is great. That’s why you saw people dying to it. If they’re put the fire in the middle of the map, everyone would avoid it easily because there’s no reason for them to go there. That’s what makes the fire hazard a great addition to the map, it’s dramatic, you can take a risk, get a reward, or lose and die.