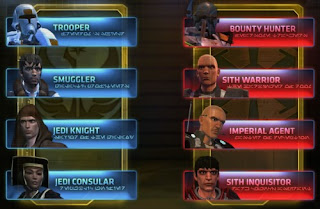 What should I play? Jedi Consular
Growing up I never knew what I wanted to be. And as a twenty-two-year-old college senior I kind of have an idea. Choosing your role in a community is very difficult. You want to be able to support yourself and live happily while still being a good person. The same thing can be said about any game with a class system. Do you want to be the guy who charges in head first? Or do you want to be the one executing enemies? Or maybe you’re better off on the side lines supporting your allies?

In MMO’s we have always run the classes by something known as the Holy Trinity; tanks, healers, and DPS. Tanks: people whose goal are to take damage and keep enemies off of their allies. Healers: people who support and make sure that their allies stay alive throughout the encounter. DPS (Damage Per Second): their main focus is doing damage to enemies. When starting any MMO it’s always difficult to figure out what role you’d like to take, and with The Old Republic’s new take on the Holy Trinity it makes it no easier.

Personally I have always played a class that supports others. Usually I’ll pick a healer or build my character in such a way that damage is my secondary objective. I prefer classes that excel in slowing enemies, or increasing damage on a target. Making someone else the star is what I enjoy doing. I’m the stage crew for the Broadway actors, and I’d have it no other way.

So when looking at classes that do this well in SWTOR, the Jedi Consular and Sith Inquisitor fit my personal tastes. As the Jedi Consular the class gives me access to many abilities that stun, slow and protect their allies.

While tanking is not my favorite role but a necessary one I’d definitely check out the Trooper as a ranged tank, and the Sith warrior as a melee tank. The two classes have different takes on tanking but both seem to have enough damaging abilities to not be ignored.

Choosing your role is important. Hopefully Bioware has programmed in spec changes to change your talents and abilities so new players can get a chance to try other things. Most players will tell you to start as damage dealers to stay out of the way of the “important jobs” like healing and tanking, but in all honesty damage dealing is equally as important as the other two roles. Keep playing until you figure out which role is best for you. This may mean changing classes or earning more gear, but once you find out what you love doing it’ll finally click. Remember be kind to those you meet, and may the force be with you.