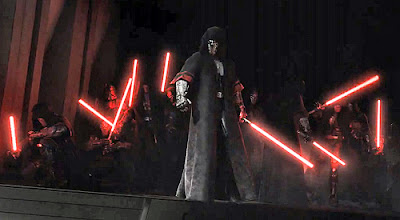 My brother had an unusual sense of pride that should have been mine.“They loved it.”
“They hated it.” We were both right.“What because some people don’t understand that the defintion of stealth doesn’t mean going invisible? Would they prefer you used the word…surreptitiousness?”“You just looked that up on thesaurus.com!”
“Don’t let it get to you. You have 6 more classes to do.”“5.” I corrected him. “Sith Warrior comes out this week.”

Welcome back to Intergalactic Intel. As always remember to take this with a truck load of salt, as this is still beta and much can change from now till release. Also remember these reviews are from levels 1-16, so the classes aren’t fully fleshed out as a whole yet. Without further ado, The Sith Warrior.

Story:
As the Sith Warrior you start on the Sith Home planet of Korriban. Home to the Sith Academy, a place we have visited multiple times in both Star Wars: Knights of the Old Republic one and two. Korriban’s make over is well deserved for this new game. While on Korriban, you spend most of your time looting the tombs of old Sith lords for their secrets, and power.

You arrive on Korriban as a rising student strong in the force. You’re pretty much given an ez-pass through the Sith Academy. As you can guess it’s a quick way to make a ton of enemies at the school. Unlike the Jedi Consular’s story, your job as an apprentice is to do what they won’t do. This means exploring dangerous tombs, and finding articles of power and giving them to your master. You feel much like an errand boy…or girl. You end your training and are sent to Dormand Kass, where you truly begin becoming a member of the Sith.

Moral choices for the Sith Warrior were actually pretty interesting. The way the Sith warrior fights, is not very graceful. It’s savage and rough. I was defiantly surprised that you get chastised for just randomly killing people. You are taught to manipulate those under, around and above you. Something I expected from the Sith Inquisitor.

As I said earlier the Sith Warrior is very savage. All of their abilities seem to just be amplifications of normal things we as people do. One of my favorite abilities is Force Scream. A simple ranged nuke, in which your warrior turns their heads and Roars at the opponent. While being a savage almost barbaric type of class, I highly enjoyed it as it far differed from the Imperial Agent’s style of game play.

Sith Warriors have virtually no problem fighting large groups of enemies by themselves. In fact I went out of my way to pull about 8 enemies at a time simply because I could. Early on it seems like the Sith Warrior has very good sustained damage, and a decent amount of burst when they feel they need it, but excel in neither.

I ended up going Sith Juggernaut, the tank advanced class for the Sith Warrior. Early game tanking is hard. You have no real way to generate threat, and don’t get a taunt until level 14. What makes matters worse is that, before you grab Sith Juggernaut you are restricted to medium armor. So you have to quickly replace all of your armor to heavy, so you don’t get obliterated by bosses. And let me tell you, the final boss on the first flash point, is not a fun or easy one to tank.

For every Sith Juggernaut, there were at least 5 Sith Marauders. My Dps counter parts are something I really wanted to try. Especially with the rumors of them having the ability to go invisible during combat. I didn’t see a large difference in DPS, but then again it’s early in the game so I’m sure their dual wielding will far surpass Juggernauts in damage.

I usually don’t talk about PvP too much in these articles, but one of the biggest questions was how useful are tanks in PvP? From my experience, tanks have a niche. Taunting a player causes them to do 30% less damage to anything except you. This is very useful for getting opponents such as Scoundrels off of your healers and dps. The problem? As an low level tank, every knows you’re a problem, and without the tools to deal with all the incoming damage, you simply become just another target. With that being said I have seen higher level tanks (40+) be able to hold thier own in combat, as well as complete objectives that other classes cannot such has carrying the ball in hut ball.

Companions:
The Sith Warrior’s first companion is probably my favorite so far. They get Vette, a smart assed young Twi’lek. Vette is a slave you receive as a present to help you with your quests on Korriban. She’s also the first companion I’ve had the opportunity to being romancing. Of course that goes past the NDA, but you do begin your relationship with her very early on.

Veterans of the original Knights of the Old Republic, will match Vette with Mission Vao. She’s a dual wielding ranged dps, with a smart remark with every bullet she fires off. Vette is very good at being in the background. She rarely pulled aggro off of me, which surprised me because anything I didn’t get to she would usually finish off before I could. Majority of the time I would leap in, kill one opponent only to see Vette finishing the other two.

Over all I enjoyed the Sith Warrior, a few more minor tweaks are needed though *coughgivejuggernautsareliableslowforpvpcough*. Oh man I don’t know what happened there…Anyway I’d like to take this time to thank all of /r/swtor, and everyone else who supports Intergalactic Intel. I’d like to take this time to announce my new upcoming project for SWTOR. Holocast, a monthly pod cast covering everything from PvP balance, Operation strategies, rumors, and a ton of other topics we can get our hands on. But I will need support and am looking for a co-host. If your interested message me on Reddit. (Conflux is my name :P) Next week I’ll be jumping back over to the Galactic Republic and reviewing the Trooper.