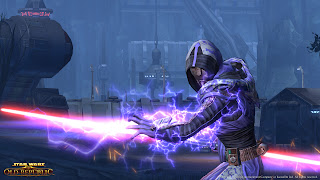 I tapped my foot impatiently. “Hurry up!”
“I’m coming!” My friend, Varric, exited his apartment with his massive tower in hand. “Why are you so eager to start?”
“There was a 2 hour wait to get on yesterday. I don’t want waste any time. Besides everyone else is already set up.”

He opened his mouth puzzlement. “How many people are over there?”“Mmm about 6 of us…” This was gonna probably be the best beta weekend yet.

Welcome to another installment of Intergalactic Intel! I apologize for the late article post, with the Thanksgiving weekend, and beta weekend I have been quiet busy. Even now as I type this my friends are telling me to stop and throw the ball in hutt ball.

A few reminders, the NDA has been lifted so I’ll be trying to blab as much as I can about the Sith Inquisitor and Smuggler classes today. In addition to the NDA being lifted I have found two co-hosts for my upcoming podcast. My good friend Maui aka Kai will be my co-host. A long time wow player and joker, as well as my brother will hopefully aid me as we begin this journey. Without further ado, The Sith Inquisitor.

Story:
The Sith Inquisitor’s story is quiet inspiring. You start off as a slave being told you’re nothing but crap. The starting world reminded me oddly of Harry Potter and his awkwardness in his first year of school. After proving yourself you’re sent to Dromand Kass, where you find a much greater legacy awaits you.

The voice acting I did not like for the male Sith Inquisitor. His voice was…icky. I guess I came in expecting someone who could easily be a snake charmer, but just got the average evil guy instead. The other voice actors or the story were superb.

Combat:
Not much to go over in combat since the Sith Inquisitor is just the Jedi Consular but with lightning Lots of lighting. I did end up going Sith Assassin instead of Sorcerer. The Assassin uses stealth and back stabs for DPS, as well as a sort of stance system for dealing damage, or tanking.

The choreography for the double bladed light sabers is beautiful. At no one point did I ever think my character was about to cut his little Sith hand off. A lot of your abilities come from you being invisible but naturally you gain talents that let you override those prerequisites.

I did do some tanking with the Sith Assassin, and I can honestly say that it’s not much different. They have the same guard ability like the other tanks and through a couple of talents and correct skills have just as much armor as their heavy armor counter parts.
Pvp with the assassin was a blast. I easily won most of the medals most games simply due to the guard ability. Guard a healer and keep running around dealing damage, making tanking a great and important part of PvP.

Companion:
Khem Val is the companion you receive as a Sith Inquisitor. An ancient being that eats force users. He was apparently once a servant of the great Tulak Hord. He constantly reminds you that you’re not as great and can eat you at any moment. So pissing him off was a past time of mine.

Khem Val is a melee tank, who is unbearably slow and starting fights. I would command him to attack and it would take him a good few seconds to do damage. He’s similar to Qyzen Fess, but I would take Qyzen in a heart beat, due to Khem’s slow movement and attacks.

Story:
The smuggler’s story is slightly disappointing to me. To me it’s a glorified version of Dude where’s my car? Though I did enjoy returning to Ord Mantell, with different motives. This time mostly for cash, though I was unable to be too cold hearted. I chose a female this time and was surprised to hear it voice acted by Kath Soucie, a familiar and experienced voice actor.

I did how ever enjoy the witty sarcasm and ass hole-ish nature of the Smuggler. No matter what if I could I would make a smart remark which usually left me in stitches.

Combat:
I ended up going Scoundrel the exact opposite class of the Sniper I covered a few weeks ago with the Imperial Agent. The biggest change was the lack of portable cover. Needing to find a space to go into cover was mandatory, but I ended up grouping with a few friends so there wasn’t a lot of need for cover.

I chose to heal again due to the lack of healers and the dire need for them in PvE and PvP content. At first there as no real difference between the Sage’s and the Scoundrel’s healing style. I eventually gained access to slow release med pac, a stack-able heal over time ability. Keeping this up on a target made life ton easier in PvP and PvE.

When not healing sneaking around with a scatter shot, a back stab type ability, combined with a stun and a few shots from a blaster. I do have to wonder why the Smuggler’s stun is a swift kick to the nether region. I’m pretty sure it shouldn’t work on droids.

Companion:
Corso Riggs is the first companion the smuggler receives. A lot like the smuggler story I was disappointed with. A character out for revenge and seems to be your buddy more than anything else. As a trooper for the Galactic Republic there is no pzazz. I feel like he would be first to die on the battlefield. He’s easily my least favorite of the companions next to Khem Val.

In combat Corso does his job as a ranged tank. A good a mount of early damage, and quick dps when needed. Much of the time Corso could finish two mobs before I could finish one. I couldn’t’t help but wonder how much better Bowdar the wookie will be.

That’s it for this week! Next week we’ll go over The Bounty Hunter, and Jedi Knight to finish off these mini reviews as we get closer to early access! Soon enough we’ll have a video of myself and a few other players from this weekend’s beta test from the Tarro Blood server. The video shows us fighting the world boss. I’ll also have a strategy for anyone who would like to fight that nasty once release hits!

I was deceived by a lie, we all were