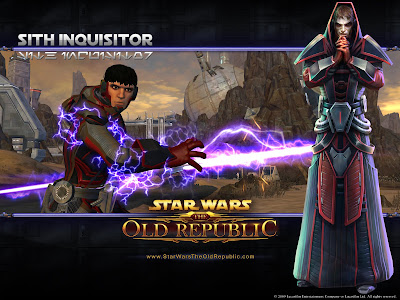 Though they already posted an earlier article talking about the press conference (where the Jedi Consular and Sith Inquisitor were unveiled) GameSpot has posted another hands-on article. Here’s an excerpt:

A long time ago, in a galaxy far, far away, game developer BioWare, a studio founded by two medical doctors on the foundations of nerdy swords-and-sorcery role-playing, made the jump to deep space with Knights of the Old Republic, a Star Wars-themed role-playing game that told a story that predated the events of the motion pictures by several centuries. Some years later, the developer is now working on a massively multiplayer online game in the same universe–a game that will let you play as a Boba Fett-like bounty hunter, a Han Solo-like smuggler, or a Mace Windu-like Jedi Knight…among others. We recently had a chance to get a bit more insight on the game from its developers, and we also had our first chance to play the game using the Sith inquisitor profession, which we’ll discuss shortly.

There’s at least one inaccuracy in the article though; I’m fairly certain that the Dashade companion for the Sith Inquisitor isn’t “a Sith inquisitor whose powerful lighting-based abilities provide excellent ranged damage” but in fact a melee character who is particularly resistant to the Force.

Anyway, the HoloNet page on the Sith Inquisitor should be up later today.

[link] to Hands-On at GameSpot.