Yesterdays Friday update brought us the last remaining character progression video, featuring the Sith Inquisitor. This is kind of a historic update, as it is the last update before early access begins. As you progress in Star Wars™: The Old Republic™, your character will acquire new skills and abilities that complement their more powerful weapons and armor. Feared across the galaxy for both their mastery of the Dark Side of the Force™ and their ability to manipulate those around them, even those within the Empire know to watch themselves when in the presence of a Sith Inquisitor. Some acolytes who complete the trials use their newfound powers to channel the Force into devastating mental and lightning attacks. Others command the Force to deceive their enemies both in conversation and on the battlefield.

Though they already posted an earlier article talking about the press conference (where the Jedi Consular and Sith Inquisitor were unveiled) GameSpot has posted another hands-on article. Here’s an excerpt: A long time ago, in a galaxy far, far away, game developer BioWare, a studio founded by two medical doctors on the foundations of nerdy swords-and-sorcery role-playing, made the jump to deep space with Knights of the Old Republic, a Star Wars-themed role-playing game that told a story that predated the events of the motion pictures by several centuries. Some years later, the developer is now working on a massively multiplayer online game in the same universe–a game that will let you play as a Boba Fett-like bounty hunter, a Han Solo-like smuggler, or a Mace Windu-like Jedi Knight…among others. We recently had a chance to get a bit more insight on the game from its developers, and we also…

The eighth and final (not counting any possible expansions and whatnot) class reveal, the Sith Inquisitor: The history of the Sith Empire is fraught with scheming politics and dark secrets—the lifeblood of the Sith Inquisitor. Treachery hides around every corner in the Empire’s dark corridors, and survival depends on an individual’s natural cunning and the will to manipulate and defeat enemies and allies alike. The Inquisitor experiments with forbidden powers to not only survive in this cutthroat environment, but to excel and seize authority. Access the latest HoloNet entry now to see a full profile of the Sith Inquisitor, including footage displaying the destructive powers of the dark side! Also, be sure to visit the Media section to get downloadable screenshots, concepts, and wallpapers! And wallpapers as well:

Fans of BioWare’s much-anticipated MMO Star Wars: The Old Republic received some good news today with a reveal of the game’s final two classes: the Jedi Consular and the Sith Inquisitor. A Jedi Consular (also called a Jedi seer) is, like all Jedi, skilled in battle, but rarely entered combat, preferring to study the mysteries of the Force. In Star Wars: The old republic the Jedi Consular is a support class specialized in healing, but with ranged offensive capabilities as well. The Sith Inquisitor is a secret division of Imperial Intelligence consisting of dark side Force-sensitive agents known as Inquisitors (sometimes also as Inquisitioners), or “truth officers”. not surprisingly in Star Wars: The Old republic it is primarily a damage dealer. It seems the first word of the Jedi Consular and Sith Inquisitor classes came from a fan translation at Star Wars MMO.net of the German magazine “PC Games”. Now,…

So you’re new to SWTOR and you’ve got questions; we have the answers. Whether you are afraid to ask in general chat or don’t trust the answers you might get, we’ve got your back so don’t worry about it. This guide is meant to be a simple newbie FAQ for SWTOR. While it’s not meant to answer every question you may have about the game or to cover every aspect of it in detail, it’s a great overview for the new player. Even if you’ve played other MMORPGs (such as WoW), you’re going to find some differences in SWTOR that will make a difference from the very start. For example, while the UI and controls are familiar, there are other aspects of the game that are different enough that you might find yourself making some big mistakes early on if you don’t take the time to read up on what…

For fans wanting to know more about advanced classes in SWTOR, Bioware’s Gerog Zoeller is giving more details in an interview with MMORPG.com. This is exciting news as the interview contains exclusive, in-depth coverage and reveals of the advanced classes that has not been previously revealed. In the interview, MMORPG.com asks Zoeller the following questions: How will players get to the advanced classes system? Once unlocked, how much customization will players find within the advanced class they choose? The Sith Warrior can become the Juggernaut or the Marauder, can you give us some examples of skills that make up these two advanced classes? The Bounty Hunter has a similar design with the Mercenary and Powertech, can you tell us about skills that define the offense and defense of these two specializations? The Jedi Knight offers players the Sentinel and Guardian, what are the main differences when playing these classes? What…

BioWare returns this week with a two-part update for Star Wars: The Old Republic (SWTOR). The first part of the update goes behind the scenes with Senior Environmental Artist Robby Lamb, who details how the game environments evolve and transform. Lamb details the creation and polish of environments in SWTOR and how he works and re-works the content to make it as epic as possible while maintaining the best game performance. The second part of the update comes in the form of a Community Q&A, which addresses a number of different questions from the community. To summarize, each class will have a number of companions from each archetype. Players can choose which of those will become their main companion and can enhance them through the use of kits. Bounty Hunters will not be able to use jetpacks outside of battle and the Jedi Knight and Sith Warrior will have no… 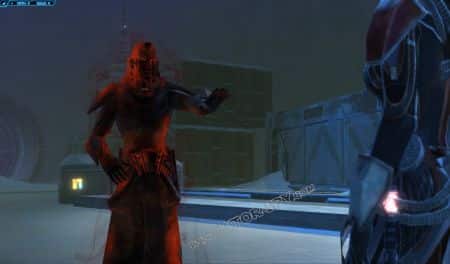 Horak-mul was a Sith Lord who sided with Ludo Kressh after the death of Marka Ragnos. The prosethic he used as replacement for his right eye was a Sith artifact. Biography Horak-mul was a Sith Lord in the years leading up to the Great Hyperspace War, and was native to a region in the galaxy known as Sith Space. In 5,000 BBY, longtime Dark Lord of the Sith Marka Ragnos died after a century of iron-handed rule; two Sith Lords, Naga Sadow and Ludo Kressh stepped in to try and fill the power vacuum. Horak-mul supported Kressh, the more conservative Sith Lord, over Sadow, an ambitious Lord who wanted to expand the Sith Empire’s boundaries. During the Funeral of Marka Ragnos, a ship coming from the Galactic Republic, the Starbreaker 12, landed in the Valley of the Dark Lords, and its crew, two Humans, Gav and Jori Daragon, were detained….

The guys at Giant Bomb have thrown up a ten minute long video interview with BioWare’s Blaine Christine that covers topics ranging from details on the Jedi Consular and Sith Inquisitor to how companion characters work in grouping situations. Much of the new info is blended into stuff that’s already been covered, but it servers as a nice refresher course on Star Wars: The Old Republic with some new stuff peppered in for good measure. More than anything else, it sounds like the Consular and Inquisitor are support classes with some offensive capability. The notion makes a lot of sense, considering the Trooper and Bounty Hunter likely perform quite well as ranged DPS classes. Of course, until BioWare begins revealing specific abilities of the classes the best we can do is guess.