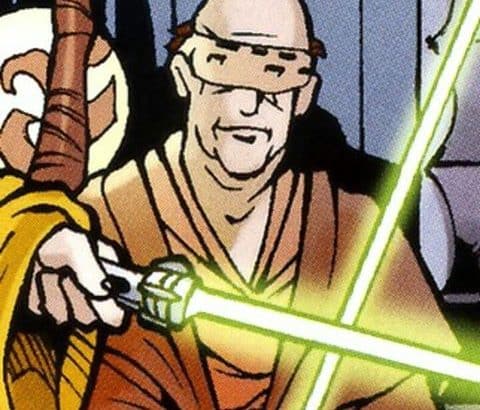 Noab Hulis was a Jedi Master prior to the Great Sith War. He was the father of Krynda Hulis, later known as Krynda Draay, and her two sisters, as well as the husband of a Human female.

Noab Hulis was first mentioned in the Tales of the Jedi Companion, published in 1996 and written by George R. Strayton. Twelve years later, the character made his first appearance, in flashbacks of the Star Wars: Knights of the Old Republic comic series issue Vindication, Part 2. He was also rendered for the first time, by Bong Dazo. In the issue, Hulis is shown to cover his useless Miralukan eyes, whereas in the Tales of the Jedi Companion, he is said to leave them exposed.

Biography
Noab Hulis was a male Miraluka who served the Jedi Order. In time, he sired two daughters, both of whom entered the Jedi Order, and then a third, Krynda, with a Human female. Krynda possessed both the precognitive abilities of the Miraluka, and the functioning eyes of a Human, and was later accepted into the Jedi Order herself, training under Master Vodo-Siosk Baas.

Hulis later came to hear of the Dark Jedi Chamma, a former Jedi Knight who over a hundred years prior had journeyed to the planet Athiss with two compatriots to confront a Sith disturbance. Chamma had fallen to the dark side of the Force during the expedition, and after destroying the Sith creature, he felt that the Force had betrayed him. As a result, Chamma went into self-imposed exile on H’ratth, and there he had stayed for over a century. Hulis sought to confront Chamma and bring him back into the Jedi fold.

Hulis located Chamma, and found the former Jedi sleeping. The Miraluka waited in Chamma’s living quarters for him to awake—when he did so, Chamma confronted him. Hulis stated his intention to bring Chamma back to the light, and the former Jedi responded by moving towards his lightsaber. Hulis advised him not to take up his weapon—he had no dispute with Chamma, he only requested that the former Jedi hear him out. Chamma did not heed the advice, however, and took up his weapon regardless, bidding that Hulis leave his residence. The Miralukan obeyed, but returned the next day. Again he was rebuked by Chamma. 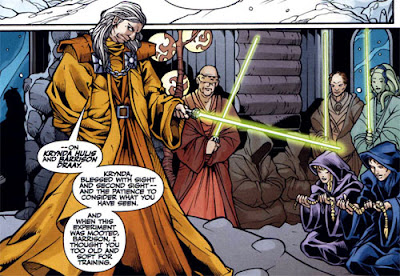 Hulis continued to visit Chamma’s residence day after day until the former Jedi finally agreed to listen to what the Miralukan had to say. Hulis identified himself, and began telling a tale of a fallen Jedi who had become a Sith, and attracted two followers to his cause. The Sith had then lured three Jedi Knights to them, in the hopes of turning them to their cause. The Jedi Knights, however, had hoped to defeat the Sith, although they lacked the requisite experience. Chamma began to realize that Hulis was telling his tale, in an attempt to muster century-old memories in the former Jedi, but the Miraluka continued. The Sith split the Jedi Knights up, and forced them to give into their anger. The youngest of the Knights, however, had been able to overcome the Sith ringleader with his new-found knowledge of the dark side. As Hulis finished his story, Chamma realized that he had not been betrayed by the Force, but that it was he who had betrayed it by falling to the dark side. As a result, Chamma returned to the Jedi Order, and after training on Ossus, he became a Jedi Master who would go on to instruct the likes of Andur Sunrider in the ways of the Force.

Family man
In time, Hulis made friends in high places. The Arkanian Alok, Lord Adasca, and the Human Barrison, Lord Draay, both counted Hulis among their acquaintances. Draay in particular had demonstrated an aptitude for the Force, and trained at Master Arca Jeth‘s praxeum on Arkania. Hulis had advocated the progression of Draay through the Jedi ranks—the young Human hailed from a wealthy estate, and had brought his retainer, Haazen, along to the praxeum to also be trained as a Jedi. Hulis was greatly impressed by Draay’s choice, as it demonstrated that all were equal in the eyes of the Jedi. Over time, Draay grew close to Hulis’s daughter, Krynda.

When it came time for both Draay and Krynda to knighted, Hulis attended a lavish reception held by Adasca—the Arkanian jokingly referred to the event as a “wake,” as Draay would finally be leaving behind his former life of business for the path of a Jedi. Hulis sang Draay’s praises, commending the young man before being led off by Adasca. Later, Hulis attended the knighting ceremony of his daughter and Draay. Master Jeth presided over the knighting, during which Haazen was overlooked for promotion. Draay and Krynda later married, although Draay would perish years later during the Great Sith War, but not before siring a son of his own, Lucien. That conflict also claimed the life of one of Hulis’s other daughters. Krynda went on to found the Jedi Covenant, watching for the return of the Sith. Although the blood of Hulis flowed in Lucien’s veins, he did not inherit the ability to see into the future from his mother, as the Miralukan blood did not run strongly enough.

Hulis was a persistent being, continually attempting to reason with Chamma even when threatened with weapons and continually rebuked. His storytelling skills were also accomplished, as they alone were able to rekindle ancient memories in Chamma’s mind, convincing him to take up the path of a Jedi once more. Initially, he chose not to cover his pupil-less Miraluka eyes, but ultimately opted to do so in his advanced age. With the admission of three of his daughters into the order, Hulis gathered a reputation for nepotism, although he also strongly advocated the development of other Jedi, such as Barrison Draay—despite the Human being initially older than the norm when he began his Jedi instruction.

As a Miraluka, Hulis possessed the ability to see into the future—a skill he passed on to his daughter, Krynda. He also wielded a lightsaber, green in hue.