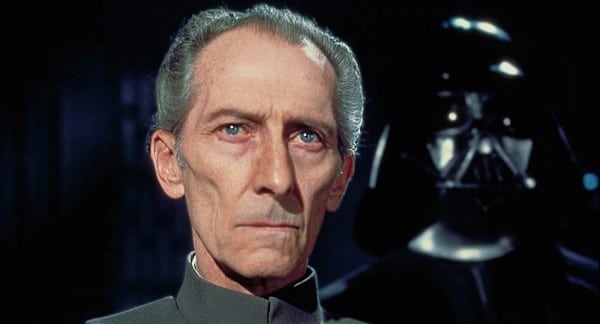 The newspaper’s source also suggests that Gareth Edwards’ film, which is based prior to the events of the 1977s Star Wars, will show Tarkin’s role during the “creation” of Darth Vader.

“This is one of the most complex and costly CGI re-creations ever,” the source said. “Cushing is a pivotal plot line as he was the one to create Darth Vader and there’s a whole back story that will come out.”

There is one major issue with the CGI resurrection for Cushing, who passed in 1994. He reportedly only wore slippers on the set of George Lucas’ space saga opener because of the riding boots that did not fit right. Because of this, the Englishman was only shot from the ankles and up.

“They are going through hours and hours of old footage from the horror movies to recreate his legs and feet to produce realistic movements,” the source continued. “It is eerie to see someone who has been dead for so long come to life on a screen.”

Grand Moff Tarkin’s reappearance in Rogue One will make sense because the film is centered on a rebel mission to steal plans for the very first Death Star. Tarkin was featured heavily in Star Wars and he was the imperial leader in command of the majorly weaponized artificial planetoid, and he was the only figure who appears to be senior in rank to Darth Vader himself.

There has been no confirmation on an actor to play Vader in Rogue One, but the evil Sith Lord has also been rumored to be returning. The very first official photograph from the set of the film was released online recently. It has been retitled as Rogue One: A Star Wars Story. The cast of the film includes Felicity Jones, Forest Whitaker, Ben Mendelsohn, Diego Luna, Riz Ahmed, Alan Tudyk, and Mads Mikkelsen. Rogue One will be released in December of 2016.