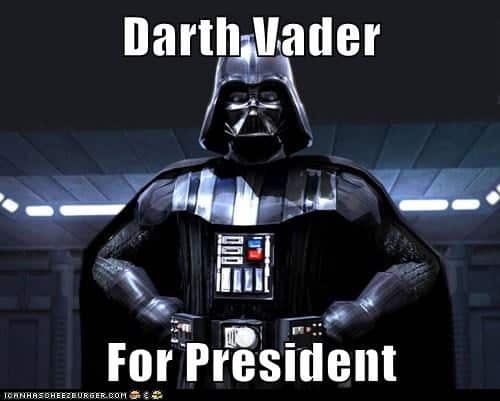 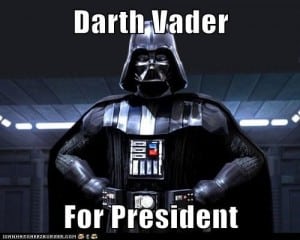 Darth Vader for president! Nope, it’s not a joke. Darth Vader is now running for president in Ukraine. The official announcement of his candidacy was made my Vader this weekend, where he was supported by Stormtroopers as he declared, “I alone can make an empire out of a republic, to restore former glory, to return lost territories and pride for this country.”

If you’re thinking this is satire, we assure you it’s not. While the crisis in the Ukraine is no joking matter, we can see why this unlikely candidate for the UIP (Ukraine Internet Party) is making the news. Apparently the unnamed protester known as the Sith Lord has been seen before this on Kiev’s Independence Square during the winter protests flanked by his loyal Stormtroopers. He won the intra-party primaries by a landslide, which is no surprise to us honestly. UIP leader Dmitry Golubov tells the Guardian more about this announcement.

A candidate wearing Vader’s trademark helmet and armor is the chosen one for the Ukraine Internet Party, a political group formed in 2010 that has selected the powerful Jedi as their representative in the May 25th presidential elections. The UIP has a history of Star Warsshenanigans. The Guardian reports that in 2013 Vader had an army of stormtroopers carry him to Odessa City Hall where he declared himself mayor, and in the past he had demanded parking for his spaceship. Explains UIP leader Dmitry Golubov, “After winning intra-party primaries by a landslide, comrade Vader will be our party’s candidate”.

So what do you think- will Vader make a great ruler? Will the UIP make a difference in the situation in Ukraine? Will we see a President Vader? 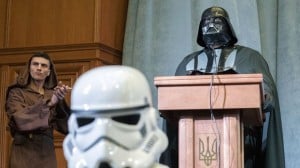