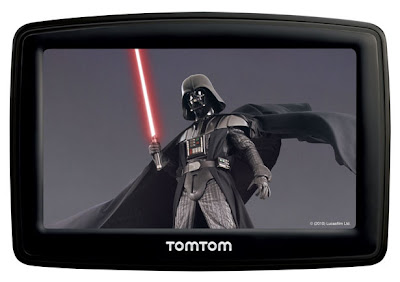 After a week of teasers and rumours, TomTom

has finally announced its tie-in (or should that be Tie-fighter) with Lucasfilm, voiceskins.com and Star Wars.

The satnav company has been sending unannounced Star Wars merchandise, including a natty Darth Vader lightsaber torch, to journalists along with emails from Vader himself in the build-up to its major unveiling: the officially-licensed voices of Darth Vader, Yoda, C3PO and Han Solo are coming to its range of navigation devices.

The first to be available, Darth Vader, has been launched today for £7.95, with the others to follow shortly (one a month until August). And, not only are directions delivered by his surly tones, but a stack-load of Star Wars sound effects are included.