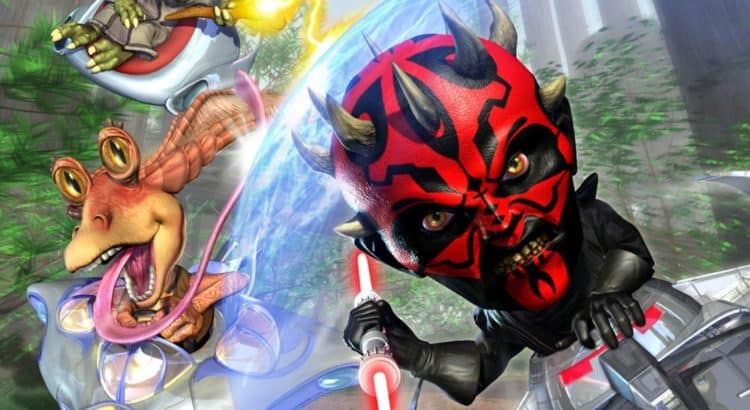 We are all about the Star Wars games here – it’s what our site was started for – and I’ve been a fan for all of my life. I love every Star Wars game I’ve ever seen, pretty much. I like the new games and I like old-school games and anything that brings the magic of Star Wars to a new or broader audience, or that brings us Star Wars in a new way, then I’m all for it.

But every now and then, there’s a Star Wars game that’s questionable. I have to ask myself, “Do you like this because it’s a decent game, or just because it has a Star Wars theme?”

And this was one of those games: Star Wars Super Bombad Racing. Who remembers this one?

I used to play this one as a kid and honestly, I loved it. Maybe young me just didn’t know any better… but I didn’t think it was that bad. Bombastic calls it the “the worst Star Wars game ever”. I don’t know if I’d go that far, but his review is hilarious.

It is DEFINITELY a Super Mario Kart knock-off. I mean, duh! That was part of the appeal. We wanted Mario Kart with Star Wars skins and that’s exactly what they gave us!

But was it as good as Mario Kart? Arguably… no. A lot of his criticism is valid – it had poor handling, terrible graphics at points, some of the vehicles didn’t make sense and some of the characters definitely didn’t fit who they were supposed to be. You couldn’t see stats so it was a crapshoot in what you were getting.

The gameplay isn’t that bad, although it doesn’t bring anything new to the genre of cart racing. The arena game mode is super hard – like, you can’t even play it kind of hard. Really, the only good thing in this game was the racing. Mindless racing and smack-talking your friends… that was the point of it.

Yoda was hilarious! I always picked him and my friends would say I was cheating because he gets the little boost at the start. It’s still one of my favorite PS2 games – probably partly because it’s a “so bad, it’s good” kind of game. It has a nostalgic feel for me, even if it’s not the greatest game ever.

What do you think? What is the worst Star Wars game you ever played?