Depending on who you ask, SWToR’s transition to the Free-To-Play (FTP) model was one of the best or worst decisions Electronic Arts and Bioware has ever made. From one side, FTP models are somewhat unpopular with gamers who claim that buying your way into achievements and perks impacts the balance of the game for those who aren’t willing (or can’t) spend the money.

On the other hand, some might argue that the model also helps games to become financially viable and remain in operation. In SWToR’s case, the decision to switch from a month-to-month subscription model was originally criticized by the press and still carries a lot of stigma associated with it. More recently however, Electronic Arts announced that their decision is paying dividends that allows them to invest more to the development of the game. 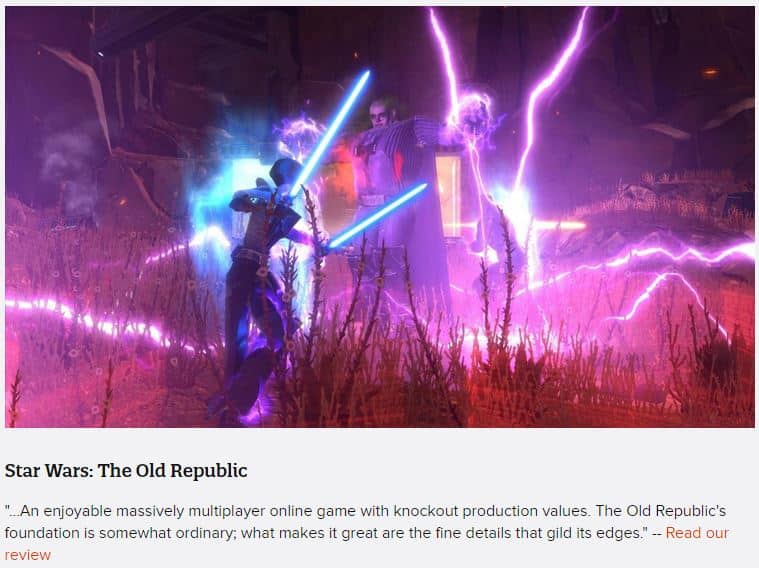 Regardless of which side of the argument each one us stand,  we can all agree that it’s a good thing when SWToR gets good press coverage. It tends to raise interest in the game that is only augmented by recent and upcoming content releases. While EA’s announcement certainly raised a lot of eyebrows, Gamespot recently included SWToR in its top 10 list of Free-to-Play PC games list. The list also included games like DOTA 2, League of Legends, Rift and others.

Even though the inclusion of SWToR to the list doesn’t represent a ground-breaking development for the game, I think it signifies a slight change in the way the game has been perceived since its FTP switch.  SWToR received a lot of interest when it launched,  that gradually dissipated and hit its nadir when the FTP switch occurred. Perceptions seemed to be getting a little better with the Starfighter expansion and they certainly got a lot better when “Strongholds” was released. Perceptions are hard to measure and SWToRStrategies.com isn’t privy to any Bioware proprietary information to back this claim. We are however fans of the game like yourself and guild members. The recent expansion has certainly created an increase in activity for our guilds and the level of interest we typically see from our members about the game. I do most of the recruiting for the guild I belong to and have been seeing alot of people coming back to experience the new content. Among them is a good number of Star Wars Galaxies fans who never played SWToR before.

In conclusion, some positive press coverage doesn’t institute a trend but it certainly shows that Bioware is steering the game to the right direction. I personally hope that the good news will keep on coming for the Austin-based developer and in extension SWToR fans.