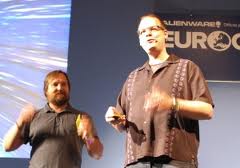 While no one actually asked them this time, the BioWare docs found reason to defend their subscription model once again, according to joystiq. In an interview with the BioWare figureheads, they spoke up with a defensive explanation of their subscription model for SWTOR, although the interviewer didn’t actually question them on it.
Perhaps they are just so used to be grilled over the subject, it’s like a canned response to interviews. Nonetheless, it was pretty fun and their answers/explanation was interesting.
“”You look at the online space in general and it’s fragmenting into all these different areas, but the core still works. The subscription model still works,” Zeschuk said. “”We know a lot of people say, ‘Oh, everything’s just going free-to-play.’ But that’s just one slice. There’s one slice that’s free-to-play, there’s one slice that’s social, there’s traditional subscription still going.”
He goes on to talk about the differences between free to play and sub-based models and how one is not necessarily better than the other because each has distinct differences. He doesn’t buy into the line that free to play MMOs will take over the industry.Joystiq reports:

The idea that free-to-play will take over all other MMO business models, he said is, “from a business perspective, ridiculous.””

For the time being, I have to say that I agree with him. While I like the idea of more games going free to play (more for me to enjoy without breaking the bank), I also think that subscription based games still have too much to offer right now and some gamers are ready and willing to pay to get those extra tidbits to a game.

For those players in particular, BioWare has you covered!