If you’re following the E3 press conference today, you know that Microsoft and LucasArts have officially revealed Kinect Star Wars. If you’re not following, that’s what we’re here for!
Star Wars fans everywhere now have a game that puts you into the action –literally! 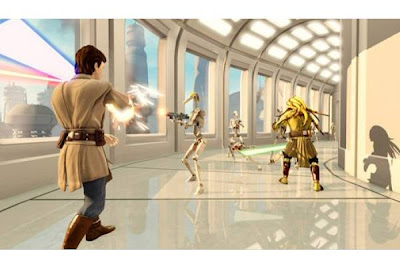 If you’ve ever really wanted to be a Jedi (not counting that plastic light saber you wield in your living room), then here is your chance. At the E3 Expo in Los Angeles, exciting news and great new games are being unveiled. There’s a trend with the Kinect this year but my favorite game so far from Microsoft is definitely Kinect Star Wars.
Built around the Kinect technology where “your body is the controller”, you can now hurl, smash and crush enemies without ever touching a game controller. Wield your lightsaber with just the flick of a wrist and move objects telekinetically with hand motions. You can enjoy Kinect Star Wars for the Xbox 360 which connects players of all ages and skill levels.
Your onscreen character has realistic motions as you control the movements with your own, via Kinect technology. In true Star Wars storyline fashion, combined with the desire to make the game suitable to a wider age range of players, you won’t see any flying limbs or blood and gore. This is the kind of game you can enjoy with the whole family
You can see the press trailer for Kinect Star Wars here.
*In addition, EA also announced four more upcoming games including its Tiger Woods golf, Madden football, FIFA soccer and an unannounced title.
0
SHARES
ShareTweet