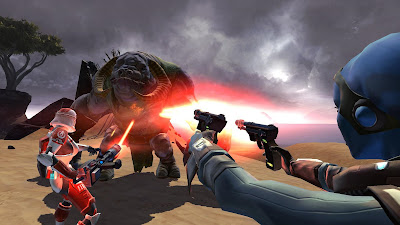 Fans of  Star Wars: The Old Republic managed to shut out a good chunk of media who had hoped to get into the Star Wars: The Old Republic panel today at San Diego Comic Con 2010 proving once again that Comic Con is definitely a fan driven event. The downside is that finding solid early media coverage is a little scarce but those of us who couldn’t attend the event will take what we can get!

Gamespot has a small breakdown of what the panel covered. Questing, open worlds and, of course, storylines were the topic.

Quests aren’t limited to players’ individual stories, however. The team discussed the concept of world arcs, which take place on a more inclusive scale and involve players joining up to complete a prolonged mission. The BioWare trio offered an example of the Battle of Hoth from the Empire Strikes Back film as one example of a world arc, where there are numerous conflicts and several principal characters to engage with.

However, given that SW:TOR presents an environment where players’ individual choices matter to the way they experience the universe, grouping with others could be problematic. This is mostly the case because each player in a group will be able to interact with non-player characters who serve as quest pieces, and choices aren’t always made on an individual basis.

BioWare felt that experiencing quests in this way creates interesting dynamics, and it wants to expose people to what it is like to try to cooperate and interact with others. However, the team also noted that they didn’t want to punish players for grouping with people they didn’t necessarily know. Therefore, even if the group decides to pursue a course that isn’t what a player would have chosen individually, the player won’t be knocked for it.

Visit Gamespot to read their full SWTOR panel coverage. But it’s probably better to just look at a 50-minute video of the panel itself: