Last week I asked for people to write me about their guild experience, and it didn’t really matter if you were a leader, officer or simply a member – all we’d like to know was yo

ur experience in mmo’s.

Luckily I encountered Krom, who was so friendly to share some of his thoughts and experiences through several mmo’s and over several years. He was also so kind as to answer some of my questions. What you read below is uncut. You can visit Krom’s guild here: www.crimsonnova.net

And now, on to the interview!

I go by the name of Krom in most of the games I’ve played. I got into guild leadership in 2001 as a third tiered officer in a Diablo 2 clan. Eventually, I became one of the tier one officers in that guild, KLS, and remained so until I left d2 for SWG at its launch.

In SWG I joined a long established guild called GP, or Glaston Pirates. Like KLS, GP had a long history in several games and was made up of generally very good people. However, the SWG branch hit troubles and I was called on to take up leadership. I lead the guild and the Role Play city of Vagabond’s Rest for several years thereafter until the NGE was released by Sony and killed SWG for me and most of the GP folks of that day. GP still exists on Starsider in SWG, by the way.

I returned to KLS after NGE, this time in WoW. Over the past 4 years or so, I’ve had varying ranks of leadership in KLS, form minor officer to Guild Leader (we call it Consul in the KLS). I stepped down from leadership about a year and a half ago to begin focus on the SW:ToR
guild. 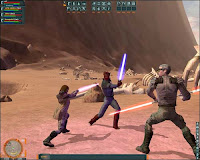 The Old Republic guild is made up mainly of those I’ve gamed with over the years, some from 2001 in the D2 days, others from WoW, many from SWG. We’ve only recently begun to recruit people from outside of our core group. Recruiting is going well so far.

That’s enough of my general history and credentials. Now to your questions:

What is your guild set up? How do you run your guild?
-In general, our guild is run by committee. I know this sounds strange to some of the rank crazed guilds out there, but we’ve all been friends for a long time; a decade in some cases. To have a “boss” would be uncomfortable. We have a group of three leaders whose responsibility it is to organize the website and events and to moderate discussions, etc. We also make the formal proposals of ideas for discussion etc, though any member may present those ideas to us. We have two mottos in our guild (GP and CN): 1. Crew is family. 2. One man, one vote. This can be messy and time consuming, for sure, but we have happier and longer standing membership because every man is important and valued.

How serious do you play and/or run the guild?
-We take the guild very seriously as a rule. However, we’re not always so serious. I think we’re a fun and loose bunch of people to game with. As for what’s important to us, that’s a complex question. We are a roleplay guild, so that’s of value to us by nature. We don’t fixate on it though. If a member isn’t interested in RP, that’s fine so long as they don’t screw it up for those who enjoy it. We will, however, sometimes put off the game play things for a good roleplay opportunity. Everything has it’s place. As for raiding, I think we’re interested in doing that in SWTOR. We don’t know what endgame will be yet, so we haven’t really discussed it. However, our goals for recruiting are based on the notions we have of the numbers we’ll need to raid based on what it looks like in other games. We’ll adjust our goals as we get more details. We’re never going to be a hardcore raiding guild, for sure, but we intend to see every bit of content Bioware hands us.

Age Requirement:
-None. We do tend to invite adults since we’re all adults, many of us with families of our own. We insist on maturity rather than age limits. Some of our finest members came to us as teenagers. I’d feel like a heel if I started keeping folks that age out now.
Website?
-We have a very nice, simple website designed by Zason. He’s a professional designer and has done very very nice work on the budget I gave him (zero dollars, btw). We pay for the domain and hosting. Everything else is made up of free stuff. I like it all things considered.
-We plan and discuss everything on the forums: recruiting, guild direction, the faction discussion, role play, etc. We use vent for complex game stuff and to socialize, but the forums are where the game plans are drawn up.

Other Games?
-Officially, we aren’t playing as a guild anywhere else now. We have been multi-game in the past, however. Our most recent venture was in AoC. Most of the team found it to be lacking, so we folded our tents. Many members of CN are currently in KLS in WoW currently, though there is no official connection between the two guilds.

Raid Planning:
-A raid leader will be selected. This person’s job is to organize the raid, research the encounters and direct the actions of the raid during the fight. We’ve used several loot distribution models in the past, ranging from free rolling, DKP, loot councils, etc. We’ve even had times when the raid leader gave loot to the person he found most in need of the items. We haven’t discussed loot distribution or raiding much at all though, since we have no idea what the system will look like.

Guild systems in MMOs:
-I found the guild systems in SWG to be horrid. You had to go to the guild hall to access your guild roster and the process to select new leaders, remove people from guild, even invite people to guild was cumbersome. The AoC system was better, but not customizable enough. We like to be able to name each rank ourselves. WoW’s system is functional, but nothing special.

I’d like to see a guild hall of some kind in ToR. I’d also like to see guild achievements and some kind of benefit for being a member of a guild for long times in order to encourage loyalty. I don’t have many concrete ideas on what these things could be, though.

Why do I run a guild?
-It certainly isn’t a power thing. I have no real power in our guild. If I left today, they’d carry on without me and hardly miss a beat. That’s the nice thing about having good people: they perceiver.

In my mind, leadership is a burden. Your job is to see to it that everyone else has a good experience, sometimes at the expense of your own. If you always select people who feel the same way, you will always have a leader who is there to serve the community, not there to have the community serve you. That’s how you survive as a guild for 10 years or more. Also, we rotate leadership. It wears you down. In a year or so, I’m sure another guild member will take on the lead position for a while and carry the burden. Eventually, it’ll be my turn again.

I’m motivated to do this because I want a quality game experience myself. The surest way to see that you have a guild that you will enjoy is to organize the right kind of people for you into a guild that everyone can enjoy. If we didn’t do it ourselves, we’d be forced to try to find it elsewhere. I also do this to help keep our community of friends and gamers together. If our group didn’t go into SWTOR together, we’d end up scattered around the galaxy all alone.

I’d really like to thank Krom for taking his time to write all of this down, and taking my questions into serious consideration. I wish all of his guildies all the best of luck when sw:tor launches!

Got any questions? Any thoughts or ideas you want to share with the readers? Or do you have something you’d like me to look into – send me mail, nothing’s too crazy or weird for me to look into! 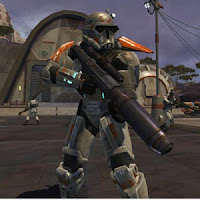