Is your guild registered for SWTOR? Do you know what you will be playing? What type of server will you be on? Will servers be faction balanced? These are all great questions for anyone looking to play SWTOR. With less than 2 months to launch, we can expect to learn a lot of the data that is out now and how that will change once release comes.

A lot of people are still decided on what they are going to play so the hopes are that the sides and the classes will balance themselves out more post-launch. However, early figures we have seen from multiple sources are showing a clear imbalance on sides and there is a website set up that shows this perfectly.

There are some interesting statistics found on SWTOR Progress about guilds and who will be playing what.

World stats show 39,370 people as “Undecided Empire” and the total Empire numbers are 121,548 with the total Republic numbers 73,269. Charts and graphs show the breakdown for this as well as US West, US East, Europe, World RP, World PVE, World PVP, US West RP, US East RP, Europe RP, and so on. 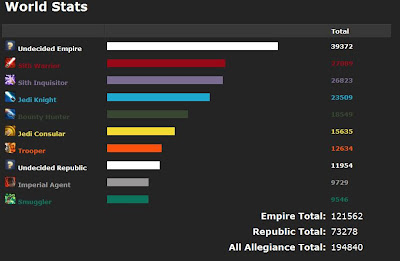 The charts make it easy to track the data and there is a comment section set up allowing for dialogue.

It’s pretty interesting for sure and with so many still ranking as undecided, we know that these numbers can change considerably between now and launch and of course, after launch as well.

What do you make of these numbers? How will it affect the game?