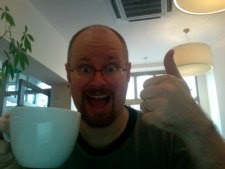 Back in September we reported that  former community manager Sean “AshenTemper” Dahlberg departed Bioware to join UTV True Game’s Faxion. Until now duties have been filled by other community representatives like Joanne Laroche and Alyson Bridge. Yesterday we learned who would be taking the place after Mr. Dahlberg as Community Manager, and this is no other then Stephen “Rockjaw” Reid.

Like probably all of you, I’ve been a Star Wars™ fan for almost my entire life – starting with the original Star Wars in 1977. When that Star Destroyer came thundering into frame, the unforgettable John Williams’ score blasting out in futuristic Dolby Stereo… well my 5-year-old mind was well and truly blown.

Fast forward to 1999, and I made a pilgrimage to Portland, Oregon (of all places) to see The Phantom Menace on opening night – midnight showing, natch. When Darth Maul’s double-bladed lightsaber ignited… well, my 26-year-old mind was blown again.

Fast forward to 2003, and from my bedroom in a south London flat, I experience BioWare’s Knights of the Old Republic™ on Xbox. When I realized exactly who I was playing… well shoot, wasn’t your mind blown? I also knew without a shadow of a doubt that with BioWare, Star Wars was in good hands.

Which brings us on fast forward right up to last week, when I arrived to work at BioWare Austin and saw – well, we’re not ready to discuss that yet. All we can say publicly right now is that it involved minds and… actually let’s just move on in case I get my own intro thread deleted.

So, let’s get the vital info in before the lock: I’ve worked in the games industry, and in various types of content and community management roles, for about 12 years. I’m a huge believer in the power of online communities to bring the creators of games closer to their fans, and vice versa. Quite frankly, I have one of the coolest jobs in the world, and that’s before you add the Star Wars factor.

In other words, I’m absolutely thrilled, excited, privileged and humbled to be here and working on Star Wars™: The Old Republic™. It’s an incredible opportunity to serve you, the community, and to help make what I know will be a landmark MMORPG.

There’s still plenty to do, to see, to talk about and of course to debate about that galaxy far, far away that we’re preparing for you to explore. I think it’s going to be an amazing journey. And I hope you’re ready to come along.

Massevely have some more intel on this guy:

You may know Reid as the Community Director at Gazillion Entertainment or maybe the Senior Community Manager at Trion World. Either way, Reid’s experience is well-known in the MMO world. And prior to his work in the States, British-born Reid specialized in public relations and community-related projects for NCsoft UK. His voice has been heard on the Yellow Spandex podcast as well as the official NCsoft Europe podcast before that. It’s safe to say the Force is strong with this one.

Reid has been a regular reader of Massively and has been known to comment on our stories via his twitter account Rockjaw. We’d like to congratulate Stephen on his new position, and we look forward to hearing the latest SWTOR news from him. Be sure to send him a warm welcome on the SWTORforums, and don’t miss our interview with this new addition to the SWTOR team coming in the next few days.

He seems like a nice guy, good sense of humor and cheerful as far as I can tell from his posts. How good of a community manager he’ll turn out to be remains to be seen (though he seems to have a good amount of experience and he’s definitely involved with the community for the moment). And I’ll let you to discover the rest of his posts on the forums; I’ll just post this one:

I’m quite aware that there’s been a lack of direct communication over the last couple of months (although that wasn’t part of a plan!), and we hope to rectify that a little (maybe even a lot – your mileage may vary). It may take a while as the seized cogs and gears start to turn again, but it should happen. There are plans afoot.

As others have said, indeed, we are heading towards launch and the closer we get the more we’ll be talking about game specifics. There’s still a way to go (and plenty to cover) but that’s a natural effect of the release getting closer.

I will say, on the general topic, that one man’s ‘discussion of vision’ is another man’s ‘irritatingly vague waffle’. So my job, in part, is to try and get a good mixture of game-specific details and broad vision statements from the devs to you folk.

That way, hopefully, everyone’s satisfied to a degree.

I’m sure you’ve heard this before (and will again) but there are loads of people who work hard to bring you updates week in and week out. On their behalf, thanks for your enthusiasm and praise – when it comes.

Welcome to the community, Stephen, and good luck in your new position.