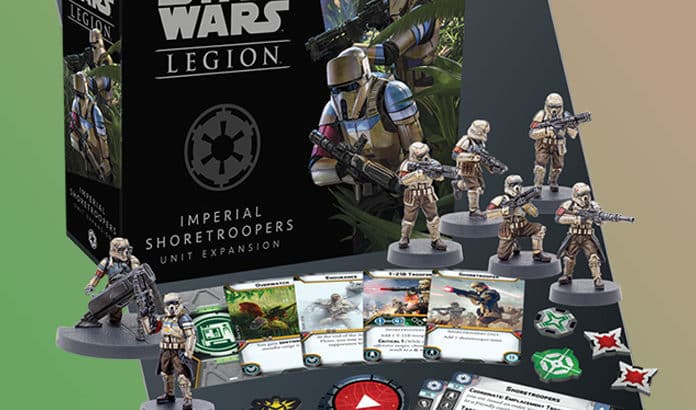 Warfare is an ineluctable element of the Star Wars™ universe, whether it’s a blow dispensed to the Rebel Alliance during the Battle of Hoth or Rebel Strike squads facing off against legions of stormtroopers on Endor. Star Wars™: Legion gives you the chance to become a part of it all in a miniatures game that brings exciting infantry battles to life!

You can get involved in the overlooked conflicts of the Galactic Civil War, commanding a unique armed force made up of brave troopers, mighty ground or repulsor vehicles, and characters as iconic as Darth Vader and Luke Skywalker. As innovative, compelling mechanics simulate the chaos of conflict and the fog of war, the unpainted, easy-to-assemble miniatures give you a blank canvas on which you can build the kind of army you’ve always dreamed of leading into battle.

Will you be fighting for the intractable, oppressive Galactic Empire or the courageous, ragtag Alliance to Restore the Republic?

Get Your Troops in Order

Star Wars™: Legion plays out over six rounds during which you’ll be duelling your opponent over objectives like taking control of the Galactic Civil War battlefield. Whoever has collected the most Victory Tokens, earned when you accomplish objectives within the game, at the end of six rounds will be the winner.

The orders you’ll be giving are a vital part of the Star Wars™: Legion journey, but you won’t be winning battles solely thanks to the Command cards you play and the units you assemble. In the same way that the animals taking part in the horse racing event you wager on when you’re putting money down at sports betting sites in NZ are responsible for your wins, your troops on the ground decide which way your Star Wars™: Legion game will go.

During the activation phase of the game, you and whoever you’re playing against will alternate triggering units, either by choosing a unit that you gave orders to in the Command Phase or by drawing an arbitrary Order Token from your Order Pool. Each unit has two possible options, moving and attacking, and you’ll need to decide which course of action is the best.

What sets Star Wars™: Legion apart is that it’s much more than just a game. It’s an invitation extended to you to create the army you’ve always dreamed of building, gathering troopers, assembling vehicles, and bringing iconic characters from the saga together to pit them against your opponent’s in battle.

Your first step will be selecting your side and choosing which units will become part of your army, and you’ll be able to make impactful choices even within the Core Set. Here your choices will include 74-Z Speeder Bikes, an AT-RT, Darth Vader, Luke Skywalker, Rebel Troopers, and Stormtroopers.

You may be planning on playing a small skirmish between just a couple of units or beginning a long-term strategic battle involving larger troops, but the units you select at this stage are your army’s foundation and the key to winning or losing.