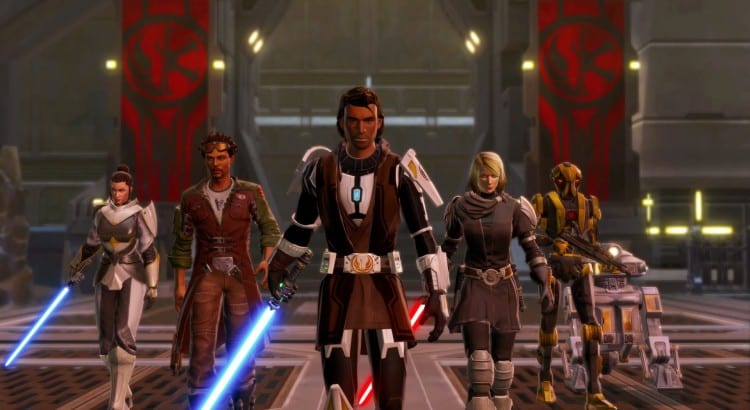 With today’s  patch 4.0.2, companion healing power will be nerfed. Here is an explanation why.

Hey folks,
If you haven’t yet seen the 4.0.2 patch notes, you can view them here. There are some patch notes that we wanted to highlight and talk about specifically.

Some of you will certainly ask, why the need to nerf Companions? This is something that we definitely saw the community be divided on, and it was good for us to hear feedback from both sides. Ultimately, this decision came down to our own goals for Companions, along with data on how they were performing. What we saw in those instances is that Companions, simply put, were just way too good. Their healing and damage output could be greater than that of a very skilled player with a fully maximized character. In order for you to understand why we are making these changes, we thought it best to explain our goals for Companions in Fallen Empire.

In KotFE, with a large focus on going back to story, we wanted to make sure that all of our story content was accessible to all of our players. The power that Companions bring to the table, definitely played a part in that accessibility. Companions, from a combat perspective, should complement and provide support to your character, not overshadow them. However, in looking at how strong Companions are, we may have gone a bit too far in that direction. Simply put, while playing through much of the game, there are a lot of situations in regular combat where it is practically impossible for you to be killed if you have a healing Companion. Although this can be fun for a time, this wasn’t our goal. Companions should be strong, they should fill any role you need, but they should not make your actual gameplay be overshadowed by how strong they are.

So with 4.0.2 we have brought their effectiveness down quite a bit, let’s talk about some of the specifics here:

We did want to make some improvements to tanking Companions:

Will your Companions feel a bit weaker than they did when KotFE launched? Yes. But believe me they will still carry their weight and fill the role you need them to in combat. All that we ask is that you log in tomorrow, and check the changes yourself. Play around with the Companions in each role and let us know your feedback. Thanks everyone.

First… Eric, thank you for actually speaking about the elephant in the room. Most MMOs I have played would have just let the threads run on, say nothing, launch patch and move.

Second… HOWEVER, questions. For people who have a basic understanding of MMO design the issue was obvious. Maybe not the exact cause but we were like “holy junk this is not right.” So… First… how did such an obvious issue get pushed to live? Wasnit a QA issue? Time crunch issue? Second… Is this the “real” issue or a band-aid?

I ask number 2 because sometimes the “real” cause is unknown at first but you know you have to at least address the symptoms. If you do not know the real cause of the issue you have to make a fix that works “for now”

I ask the second question because this change will be a rather large shock to some and people can only sustain so many of them.

Good questions, let me take a stab at them.

First answer – This wasn’t a QA issue as it isn’t a bug. Our goal with Fallen Empire was to ensure that all of our story content was very accessible to all players, new and old. The power of Companions was certainly a part of that, and so we do want them to be strong. However, we went a bit too far on the strong side, and need to bring that back in line.

Second answer – You can kind of see from the first answer that this will work to fix the issue and not be a band-aid as it is just a question of balancing. Now, it is always possible we will make future tweaks, but this should bring Companions more in line. They will still be strong, but they will not overshadow the power of a player.

just one question then eric:
for those of us who like to play solo like me, will I still be able to go through with my healing companion and do the weekly heroics to build our influence/alliance? because right now that’s all I’ve got to work with solo wise.

Absolutely! It certainly may be a bit more challenging than before but you can complete them. The intent is that you can complete any [Heroic 2] with your Companion counting as one of the two. If you find this isn’t true for any Heroics tomorrow, let us know.