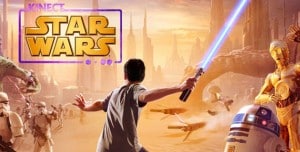 Feel the Force when you are the controller- I know what my son wants for his birthday but will it be as big of a hit as many are expecting? Coming soon on April 3rd is Kinect Star Wars and they’ve now released the official launch trailer.

What you will see missing from the trailer is Kinect Star Wars‘ dance mode, which didn’t come off as such a hit when it was revealed before.

“Kinect Star Wars brings the Star Wars Universe to life like never before. Harnessing the controller-free power of Kinect for Xbox 360, Kinect Star Wars allows fans to physically experience training as a Jedi, using the Force and battling with a lightsaber. Using full body motions, players can live out the ultimate Star Wars fantasy, no controller required.”