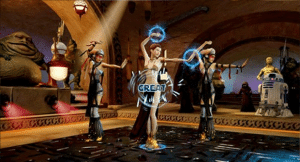 This is probably one of the funniest videos of the dancing mode in the Kinect Star Wars game. Even the author/dancer of Star Wars Dancing says,

Embarrassing is putting it mildly because I know I would never post a video like this of myself attempting to do these dance moves (ok, well maybe I would). I do give him credit though; it takes a great deal of courage to put yourself out there like that. As for the game, I absolutely love the reaction times between the player and the game. There was no lag that I could detect between the moves made by the player and the character in the game. Even the slight head shakes and hip movements were caught by the Kinect and the character reflected these moves as she was dancing in the game. It still tickles me to see a big guy like that standing next to the sexy character in the game and mimicking the moves. Don’t let anyone say big guys can’t move because this one obviously can and does!

It’s also good to see a positive video of the dance mode from Kinect Star Wars because up until now, it’s not getting a lot of praise.