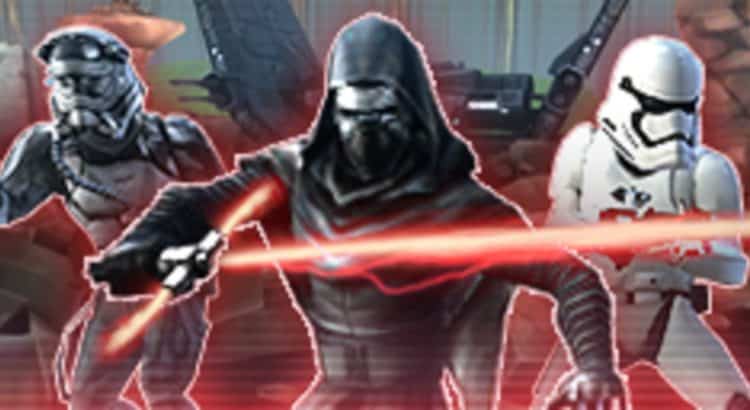 BB-8 ROLLS ONTO THE CANTINA! 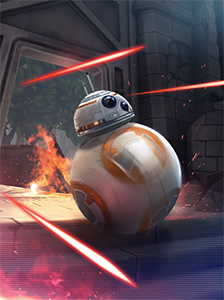 A skittish but loyal astromech, BB-8 shines as a stellar support for any squad. He is especially potent in Resistance and Droid squads. BB-8’s ability Covert Data Transfer introduces a new buff, Secret Intel, that grants bonus Potency and spreads to allies that use a special ability.

This new addition to the Holotable may be small, but rounds out Support in a new and exciting way. Particularly with the first special ability (Covert Data Transfer) that does not require a cooldown. For more information on his abilities and kit, please be sure to check out the Character Strategy post <<HERE>>. BB-8 can be obtained through the upcoming Legendary event, Pieces and Plans detailed below!

PIECES AND PLANS LEGENDARY EVENT
The First Order seeks the final piece of a lost galactic map held by BB-8. Deploy your forces to Takodana and Maz Kanata’s ruined castle to capture the droid! Be sure to tread carefully as this astromech rolls with a formidable Squad. Defeat Veteran Smuggler Han, Chewbacca, Rey, Finn, and BB-8 himself. Succeed and earn shards for BB-8!

With Captain Phasma at the helm as the Daily Login for the month, it’s time for the rest of the Squad to follow shiny silver suit. Power up your First Order Squadron! Enjoy Double Drops on First Order nodes from 9/22 to 9/25.

TERRITORY BATTLES RETURN
In response to the data and player feedback, the following changes have been made to Territory Battles going forward. These changes should be seen in the next instance that launches tomorrow (Thursday, September 21st at 10AM PDT/5PM UTC) Listed changes can be seen below. For more in depth information, please see our breakdown via our Dev post <<HERE>>.
CHANGES

SHARD SHOP 2.0
The Shard Store has been refreshed to focus on a wider variety of gear. The refresh timer has been reduced to 6 hours, and refresh costs have been reduced. Additionally, Character shards (Other than General Grievous) have been removed.

One in a Million

General of the Republic

First Order Faction Pack
Power up your First Order faction with a FIRST ORDER FACTION PACK.
Each pack awards one card of character shards worth between 10 to 330 Character Shards for First Order characters.
Possible characters:

Resistance Faction Pack
Power up your Resistance heroes with a RESISTANCE FACTION PACK!
Each pack awards one card of character shards worth between 10 to 330 Character Shards for Resistance characters.
Possible characters:

WHAT’S AHEAD
A team rises from the ashes stronger as a familiar foe returns.