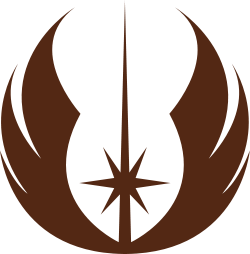 The Jedi Order was an ancient and noble monastic peacekeeping organization unified by its belief and observance of the Force. The Jedi were the guardians of peace and justice in the Galactic Republic, and became the most famous of the various groups that relied on the Force for their power. Led by a series of Jedi Councils, the Order grew over the millennia despite facing many trials, most often threats from the Sith, wielders of the dark side of the Force.

Origins and brief history of the Order
Since the beginning and most likely before the Galactic Republic, scientists had been studying the Force and its connection to midi-chlorians. This research was conducted most notably by the Paladins of the Chatos Academy, The Followers of Palawa and the Order of Dai Bendu, on planets like Ondos and Had Abbadon. The Jedi Order itself, however, began on Tython, where the brightest and best philosophers, priests, and warriors came together long ago to discuss their discoveries involving the enigmatic, mystical positive energy called the Ashla. Those who wanted to use the Bogan, the negative energy of the Force for their personal gain ignited a century long conflict called the Force Wars, from the ashes of which arose the Jedi Order. Some of these Jedi left Tython to defend the Galaxy, and became known as Jedi Knights.

Initially the Jedi were a contemplative order, but over time they began to take a more direct and active role in galactic affairs. The Jedi followed the “light” side of the Force, using their power for unselfish and beneficial acts. In the ensuing millennia, the history of the Jedi was intertwined with both the Republic they served and the Sith they fought.

The order suffered many Schisms—the first was the Great Schism, which produced Xendor’s Legions of Lettow, but the most consequential was the subsequent Hundred-Year Darkness in 7,000 BBY, where the Dark Jedi, once again defeated, were banished from known space.

They arrived on Korriban, the home of the Sith people, a primitive but Force-sensitive species. The Dark Jedi impressed the Sith with displays of Force power, and became the rulers of the planet and formed the Sith Empire. Over time, the Dark Jedi intermarried with the Sith, and the two identities merged. The term ‘Sith’ would later come to refer not only to the Sith species but also to the Dark Jedi who followed the codes of these ancient Jedi.

In 5,000 BBY the Jedi and the Sith Empire clashed in the Great Hyperspace War. The Sith were defeated, but would return to haunt the Jedi in the Old Sith Wars and the New Sith Wars.

Sometime over the next one thousand years, the Republic granted the Jedi land over a Force nexus: a sacred mountain on Coruscant. The Jedi eventually centralized themselves here, founding the Jedi Temple in 4,019 BBY, which would stand for four thousand years.

Between the end of the Great Sith War in 3,996 BBY and the beginning of the Mandalorian Wars in 3,963 BBY, some Jedi traditions and organizational structures seem to have changed quite radically. Jedi of the period prior to the Great Sith War were openly allowed to marry and raise families. Each Jedi apprentice would be trained at a local Praxeum run by individual Jedi Masters, each of whom had a number of students. Governance of the Jedi Order was handled by a large-scale temporary gathering called a Jedi Convocation or Jedi Assembly.

After the Great Sith War, the Jedi seem to have adopted a stricter monastic code, forbidding marriage and other family attachments. The looser Jedi Convocation gave way to a permanent Jedi Council on Coruscant, made up of 12 respected Jedi Masters. Regional enclave councils, such as the one on Dantooine, handled day-to-day issues in more remote areas, and ultimately answered to the Jedi High Council on Coruscant. This is the earliest point at which the term Padawan is verified as having been in wide use, and more individualized one-on-one relationships between Masters and Padawans replaced the larger classes of the Praxeum system. It is also possible that this was the point at which the revised version of the Jedi Code as established by Master Odan-Urr began to be accepted as the canonical version.

Political organization
Eventually the Jedi formed a central political entity called the Jedi Council. The High Council was a gathering of great minds that acted as a governing body for the Order, as well as an advisory board for the Old Republic Senate. The Jedi Council could only have 12 members at a time.

Among other tasks, the Jedi eventually became responsible for law enforcement and peacekeeping in the Galactic Republic. Many Jedi held different opinions on peacekeeping; while some favored diplomacy at all costs, others advocated a more direct approach, such as issuing “aggressive negotiations,” with the majority striking a balance between the two extremes.

The Jedi Council of 4,000 BBY refused to enter the Mandalorian Wars until they felt the “threat had been assessed”, taking a more passive stance on the issue. Later, perhaps due to the Order’s near extinction as a result of that decision, the Jedi that rebuilt took a slightly more aggressive stance, culminating in the New Sith Wars where they actively ruled the Republic as a quasi-military dictatorship. During the Clone Wars, in the twilight years of the Galactic Republic, the Jedi acted as Generals, soldiers and military advisors in the conflict.