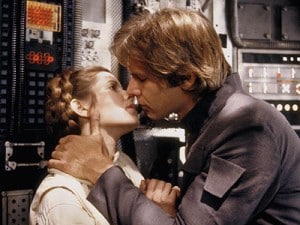 Star Wars fans may not be happy to hear that George Lucas says there will never be a new Star Wars. Ouch!

If you’ve been waiting for Episodes VII, VIII and IX to someday hit the theaters, it’s not happening, says Lucas. It’s not actually the first time that he’s said he has retired from the Star Wars genre but this time he made it sound pretty final. It’s like Lucas is saying “I made my decision, now stop asking me.

On Wednesday, George Lucas blasted away any chance of ever seeing a new birth of the “Star Wars” franchise when TMZ briefly caught him leaving a Hollywood restaurant.

Asked when the newest installment of “Star Wars” would be, Lucas was blunt: “Never,” he said, adding “I’m retired.”

We’ve written about this before and it does seem like Lucas is a bit bitter over the fans who didn’t like what he had done with the movies. If that’s the real reason he’s officially retired the Star Wars movies, then it’s pretty depressing to those of us who actually enjoyed the movie. He should have continued with his creative vision despite what the haters said.

What do you think about there never being any more Star Wars movies? And do you care?