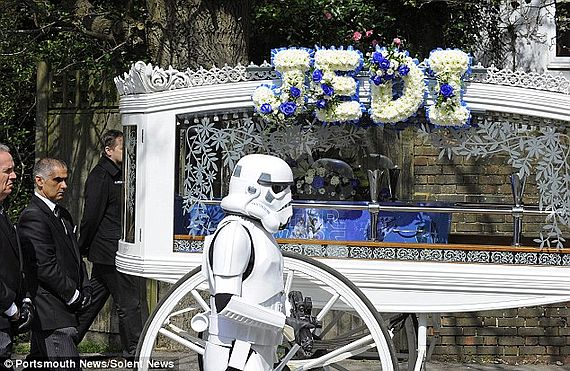 It’s something no parent ever wants to have to do- bury their child. Sadly, the parents of 4-year-old Jack Robinson had to do just that. Their little boy had an inoperable brain tumor and sadly, died on April 1st. But little Jack but have a send-off worthy of his short, but special life. His parents and family gave him a Star Wars- themed funeral that they say he helped to plan before his passing. The family said that there son was a very special soul who brought together people from all over the world, despite his young age. Because of this, they wanted to give him a very special, unique  funeral.

UK’s The Mirror describes the event:

“His body arrived in a Star Wars coffin on a white horse-drawn carriage surrounded by Stormtroopers.

The carriage was decked with floral tributes, including one reading ‘Jedi’ and wreaths in the shape of a lightsaber, Yoda and R2-D2.

It was also packed with Star Wars images. Parents Terence, 47, and Marie Robinson, 41, made the funeral public and scores of people lined the streets in Denmead, Hants, to pay their respects.”

Jack was diagnosed with a brain tumor in January and while doctors tried to remove it, the tumor was inoperable and cancer would take his life. Little Jack was a huge Star Wars fan and even in his last days in the hospital would spend time playing with Star Wars toys and watching the films.

May the Force be with you forever, Jack!