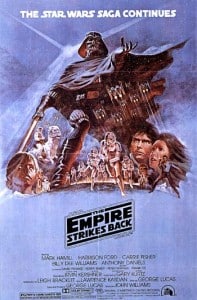 The Empire Strikes Back has topped a poll of the greatest movies of all time. I can’t say that we are really all that surprised at this news. Despite the beef that some people have with the movie, it is still a classic. It’s a part of pop culture and you’d be hard-pressed to find someone today who doesn’t at least know of the movie.

The movie, which came out in 1980, beat over 301 other titles in Empire magazine. Yahoo! UK News brings us more on the story:

Creator George Lucas said it was a “privilege” to be voted top.

“The fans like The Empire Strikes Back the best, partly because it is so dark.

“It’s an overall story and as it happens in the second act, things get dark.

9. Raiders Of The Lost Ark

Would you agree with this poll? Did any of your other favorite movies make the Top 10 list?