The Sith fighter was a tentatively named starfighter of ambiguous origin that formed the bulk of Darth Revan and Darth Malak’s space forces during the Jedi Civil War. 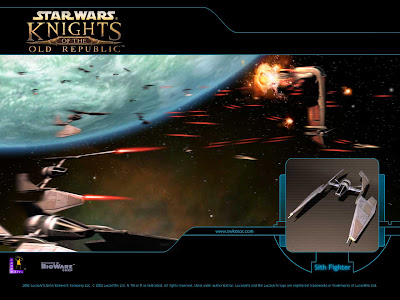 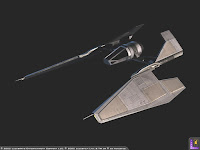 Little has been gleaned about these fighters specifications. They appeared to carry a prototype twin ion drive system, seen only in this design. Its design appears to be a hybrid of various technologies, matching no specific world. Its specifications gave the fighter maneuverability to the point of instability, meaning much of the central chassis was given to managing the reactor core for optimal performance.

When docked, not in use, or traveling through hyperspace, the Sith fighter had the ability to fold its wings and power down its weapon systems. In combat, these were unfolded, and the laser cannons brought to bear, a concept later seen in the S-foils. This allowed it a broad attack arc, while its small profile made it difficult to target.

The Sith fighter’s design was intended to recall that of the TIE starfighters of the Galactic Civil War. Perhaps coincidentally, they also greatly resemble dark side starfighters seen in a flashback in Tales of the Jedi: Knights of the Old Republic.

History
The Sith fighter first appeared as Malak and Revan returned to the Republic as conquerors after the Mandalorian Wars. While many of their capital ships were turncoat Republic vessels, the majority of their forces were made of these curious fighters. Produced by the Star Forge, they could be easily stored in cargo bays, such that even a single mothership could deliver swarms of them into battle. Further, they were quick to scramble, making them a deadly first strike.