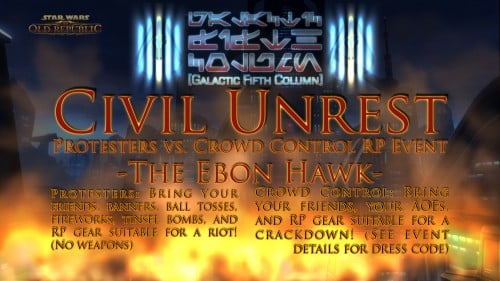 Empire guild The Galactic 5th Colum of The Ebon Hawk server is arranging role playing event happening on Friday the 28th. SO if your up to some rioting between xmas and new years eve, come to Dromund Kaas, Kaas City, the Spires of Victory at 9pm EST on Friday 12/28/12 . Check out the video below:

A significant number of Dromund Kaas citizens are protesting Sith infighting and incompetent military commanders causing the death’s of many loyal servants of the Empire. Behind the scenes, the GFC has been inciting the protest. Naturally, there will be a massive crackdown and chaos will ensue. Just how we like it.

So here’s more of the OOC stuff. Two groups will gather opposite each other. One group is the protesters, the other is law enforcement. Those RPing law enforcement should wear Imperial Trooper armor to get in the spirit of things. And the protesters should be unarmed and dressed in more civilian-like RP gear.

At first, the protesters will be putting up banners and chanting or things like that. The Imp Troopers will be standing at the ready. Eventually it will escalate and people will start throwing stuff at the Imp Troopers (ball tosses and tinsel bombs and the like). Eventually it will get to the point where the Imp Troopers start firing on the crowd (AOEs) and it will devolve into a riot. Some people will probably flee right away, others might stay and put up more of a fight. But the crowd will inevitably be broken up and dispersed.