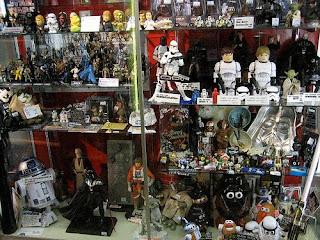 In 2010, Lucasfilm broke its record for the most revenue gained from toy sales in a year without a Star Wars theatrical release, raking in $510 million dollars worth of action figures, space ships, and other assorted hunks of plastic.

The Hollywood Reporter points out that, though there were no Star Wars films in theaters, the popularity of the Cartoon Network’s Star Wars: Clone Wars maintained a certain pop cultural profile for the franchise.

Keep in mind that this is purely toy sales, and does not include the myriad of other merchandise from a galaxy far, far away. When George Lucas negotiated his contract to write and direct the first Star Wars film, he insisted on maintaining the merchandising rights, including toys, and 20th Century Fox readily agreed.

At the time, studios didn’t view toy tie-ins as a meaningful enterprise. Lucas corrected their thinking, and you’ll notice that almost every big blockbuster these days is accompanied by a slew of toys and related merchandise. Hell, in the case of the Transformers franchise, they finally made a huge movie based on the toy instead.

This year, Star Wars will be even more inescapably ubiquitous, with the September DVD and Blu-Ray release of all six films. And after that, we’ll be treated to 3D re-releases of the entire franchise, one-per year, starting with The Phantom Menace in 2012. That’s right, you’ll soon be enjoying the narrative slough of Episode I in three dimensions.

First: Will you be among the small minority of people who actually pay to see the prequel trilogy in 3D?

Second: Out of curiosity, do you own any Star Wars toys?