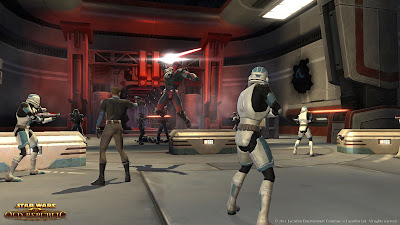 In BioWare’s Friday update for Star Wars: The Old Republic, World Designer Jesse Sky talks about building “Flashpoints”. So, what is a flashpoint and why might one want to design one?

A Flashpoint is a galactic crisis, something so threatening that even the most stalwart heroes must bring allies. The Death Star was a Flashpoint. Luke and Obi-wan spent a few minutes LFG in the Mos Eisley Cantina where they enlisted the aid of Han Solo and Chewbacca. Together, they infiltrated a moon-sized battle station to rescue Princess Leia. Things didn’t go quite as they expected; difficult choices were made along the way. That’s a Flashpoint in a nutshell.

In game terms, a Flashpoint is a challenging, cooperative mission that takes place entirely within an instance, which only your group can enter. While adventuring, you’ll be alerted to a crisis developing somewhere in the galaxy. That’s when you know it’s time to contact some friends and buckle up for an epic battle.

I like how Jesse compares Flashpoints to, basically, the first Star Wars movie and he certainly does make them sound fun and interesting, bits of compelling story one wouldn’t want to miss. However, that quite from Georg above pours a few buckets of cold water on the whole idea and remind me why I’ll probably never see much of them. Not only do I tend to play solo more often than not, but it sounds that pickup-groups aren’t going to be coordinated enough for them and the friends that I do have who might go through them with me probably aren’t coordinated enough either (we tend to have quite a bit of trouble with LotRO’s instances and skirmishes… even several levels below our level). I just hope that they’ll have more… casual Flashpoints as well.

Or maybe a difficulty setting for Flashpoints is an idea? In the end I’m not interested in ‘challenge’, but I am interested in story.