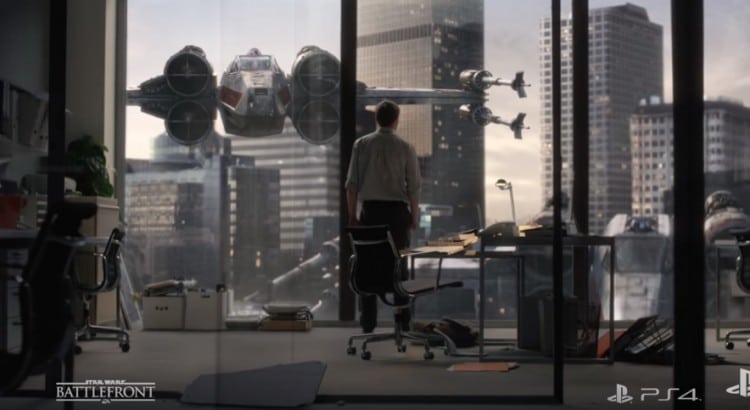 The Force Is Strong With PlayStation. This holiday season, you can get nostalgic and enjoy some Star Wars Battlefront. In this new commercial that aired on Sunday (October 18th), we see what happens when Star Wars kids grow up. It’s clear this commercial is meant to tug at the memories and heart strings of a certain era of people.

The trailer features a guy stuck in a seemingly boring office job, reminiscing of his youth with a good friend (or brother, perhaps?), loving Star Wars. They take us through several years’ memories to show us just how much these boys loved their Star Wars. Then he looks back at the R2-D2 figurine in his hand when suddenly, there’s his friend/brother outside the office window with a pair of X-Wings.

He breaks out (in a completely unrealistic way, using a chair) and jumps in to join his partner for some space battles. Some of you may get a kick out of the “not actual gameplay” warning on the trailer.

All in all, it’s a cute commercial and it really gets you in the moment. It will definitely appeal to Star Wars fans but it really doesn’t do much at all to show off actual gameplay footage or any features you can actually expect to see in the game. So while it works to churn those emotions (and people are emotional buyers, after all), it won’t give you much insight into the game itself.

Check it out if you haven’t already and let us know what you think.

There you have it. What are your thoughts?