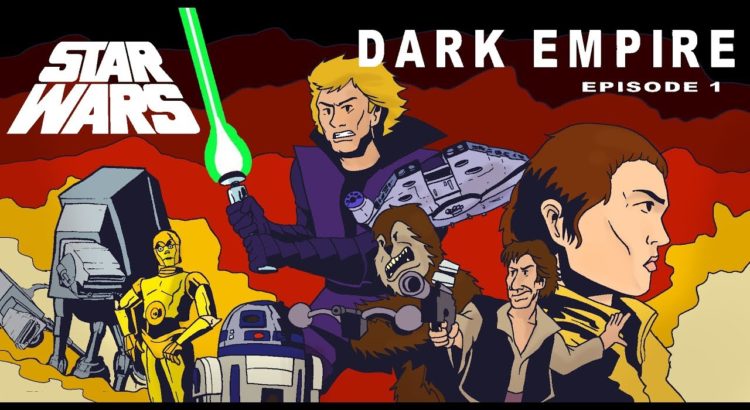 Dark Empire Episode 1: The Destiny of a Jedi is a recently released short film from WilkinsAnimations. With a run-time of approximately 12 minutes, it’s definitely not the length that makes it stand out. Instead, it’s unique, 1970s-era animation style and great story line are what keep you interested.

In fact, the short is so good it actually feels like a teaser – just casually wetting your appetite for a full-length episode. The creator does have additional episodes in the works, which is exciting because this talented artist may be able to bring in a big enough audience to capture the attention of the likes of Lucasfilm Animation.

The story follows an adventure featuring Princess Leia, Han Solo, Chewbacca, C-3PO. R2-D2, and Luke Skywalker. The events take place a few years beyond the battle of Endor. A new, unknown disturbance within the force has appeared in the galaxy, threatening all life. Luke seems to believe he is what this new evil is after.

After stepping in to help Solo, Leia, Lando, and the gang escape danger within an all-out warzone using the Force to take out droids and an AT-AT with ease, Skywalker then decides to stay behind on this dangerous planet. Han Solo and Leia aren’t pleased with his decision after traveling the galaxy just to rescue him. They do, however, wind up leaving him behind as an approaching “hyperspace wormhole storm of undetermined magnitude” sweeps through.

Luke and R2 are sucked into the storm as the rest of the gang flee the planet in the Millennium Falcon.

The next installment of this series, Dark Empire Episode 2: Devastator of Worlds, hasn’t been released just yet. Nor do we have an official date for its arrival. It’ll definitely be worth keeping an eye on the WilkinsAnimations YouTube channel for when the new episode is made available to watch.