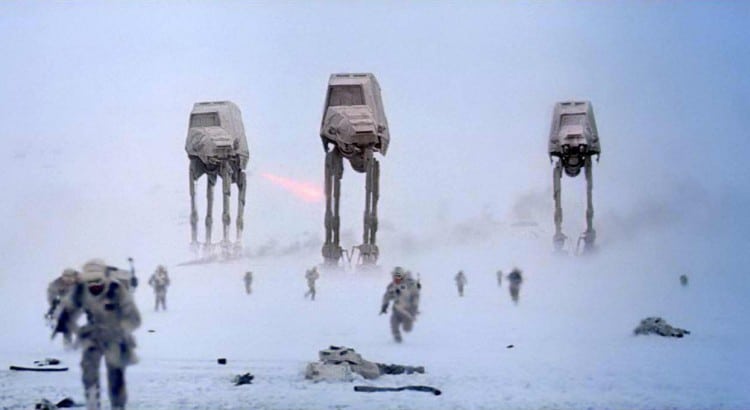 For as long as I’ve been alive, developers have been trying to get the planet of Hoth right in video games. Here, Kotaku takes a look at Hoth in Video Games: A 30 Year Battle and explores games that got it right and those that got it not quite right, and everything in between. It all began in 1982 (the year I was born) with Atari’s “The Empire Strikes Back”“.

For the time and the Atari 2600, this was a fine looking game. There was then a 1983 arcade version and in 1985, a follow-up to that arcade version, also for the Atari. 10 years after the original, Nintendo gave us a game featuring Hoth for the NES. “The Empire Strikes Back” again made a presence in the video game console world. Hoth was looking pretty good by this version. I recall playing this one at a friend’s house but then we see the true difference a year can make because when they came out with the Super NES version in 1993, we got the least authentic looking Hoth to date. 1993 did, however, bring another Star Wars game: Star Wars: Rebel Assault for the PC, Sega CD, Mac, and 3DO, the first CD-only game published by LucasArts, with a great Hoth level.

Kotaku takes us through the rest of the 90s and the games that attempted to get Hoth right. In 2001 we got a new console and another attempt from Nintendo. We also got Star Wars: Galactic Battlegrounds in 2001.

2004 would bring us the very first Star Wars Battlefront and 2006 would give us a LEGO version of Hoth. Throughout the ages, the platforms and the technology changes, Kotaku takes us along the many faces and worlds of Hoth until we get to the most realistic Hoth to date – Star Wars: Battlefront in 2015.

How many of these games have you played? Who got Hoth right and who royally screwed it up?