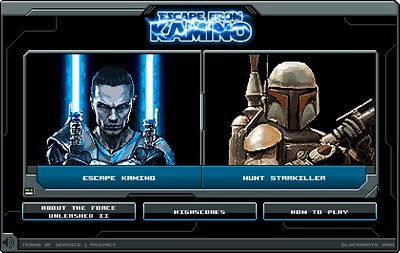 Star Wars fan will be delighted to know that along with the release of Star Wars: The Force Unleashed II comes another game. Lucas Arts and Activision join the world of Facebook game applications with Escape from Kamino. A retro-styled game that bring players further into the world of Star Wars.

Lucas Arts and Activision are proud to announce the launch of the official Star Wars: The Force Unleashed II Facebook application. This new retro styled game called “Escape from Kamino” follows the opening sequence that many TFU fans have played already in the TFU2 demo, at the same time tapping into the viral nature of Facebook by allowing you to challenge your friends and other players internationally.

Within the game you can choose to play as lead character Starkiller and attempt to escape the clutches of the Evil Empire, or become Boba Fett and hunt for the cloned Jedi knight.
This 16 bit stylised game takes the retro feel of classic games gone by, and successfully recreates that Star Wars feel that many know and love. Even the application sound track is reminiscent of the Super Star Wars series.
Star Wars fans, casual and hardcore gamers alike are sure to become addicted to this fast paced action runner.
Escape from Kamino forms part of the marketing campaign for Star Wars: The Force Unleashed II which is released on Friday 29th October across Europe.
http://apps.facebook.com/escapefromkamino
http://www.facebook.com/starwarstheforceunleashedII
LucasArts 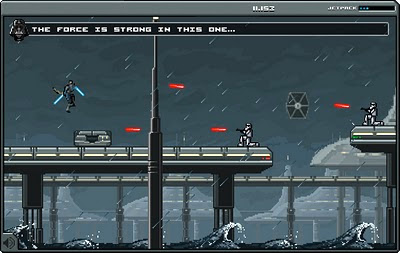 And a million fanboys just… shivered with excitement.