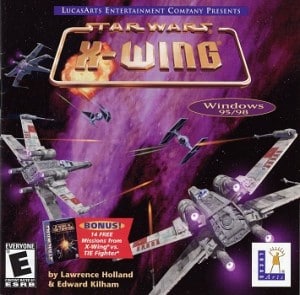 No one can really deny that the Rebellion picked the tough road when they decided to rise up against the numbers and might of the Empire, unless of course you argue that good always triumphs over evil. Unfortunately, unless you’re Luke Skywalker himself, X-Wing will quickly prove this to be a rare case. It’s one of the hardest flight combat sims ever made, and it’s filled with odds and situations that will make you wonder more than once if you’re playing for the wrong team (and should the call of the Dark Side become too strong, you can even defect, by purchasing TIE Fighter).

But as difficult as it may be, X-Wing is also one of the most addictive and beloved combat sims you can hope to find. Confirmed Star Wars fan status is not required. Provided you have even a passing tolerance for playing what is essentially a combat flight sim in space, you should find something to enjoy here. 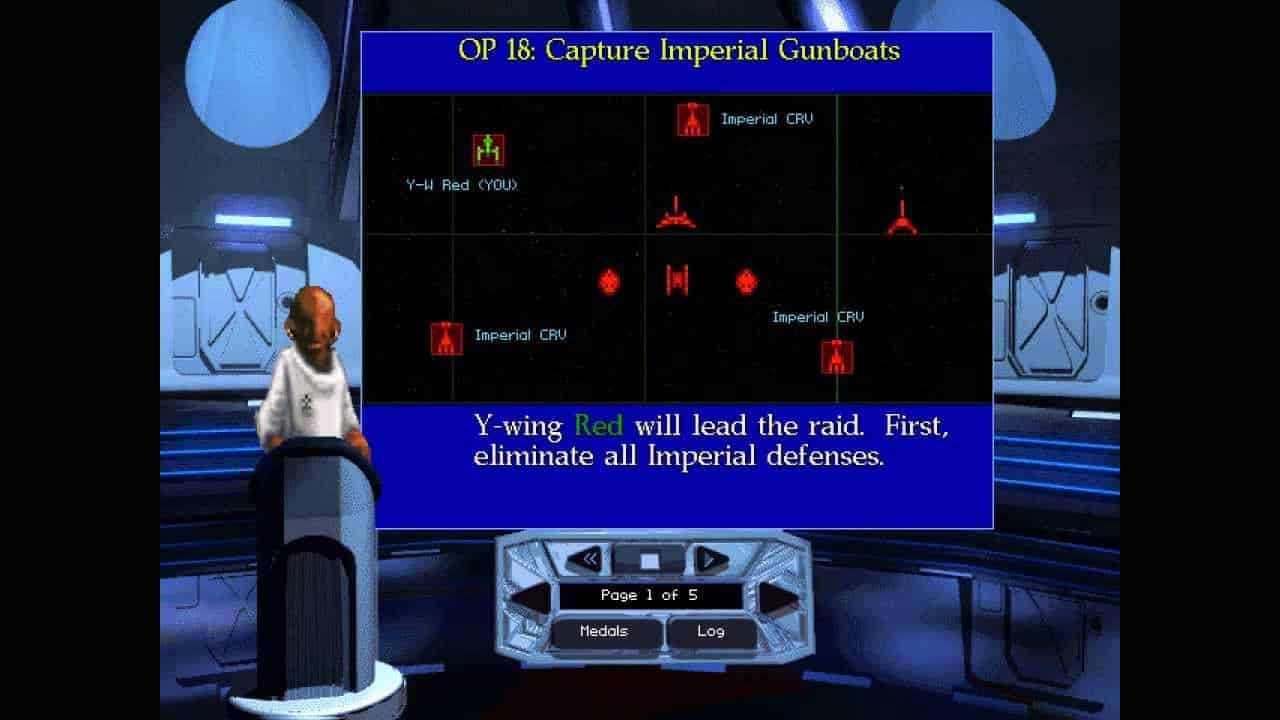 Star Wars: X-Wing became better when Collector’s CD Rom came out, which became even better still with the addition of Collector’s Series, which moved the game out of the simple graphics of DOS and into the Windows environment, giving it fresher the graphics seen in X-Wing Versus Tie Fighter. Even still, it was all the same game, and no other starfighter simulator has come close since, with the exception of its equal, the original Tie Fighter.

Back during the old days of starfighter sims, there were two hallmarks, both following two different paths. There was X-Wing(and Tie Fighter), which ditched story in favor of a precisely technical representation of its starfighters and capital ships and a certain strategic viewpoint in the execution of its missions. And there was Wing Commander, which ditched precision in favor of high speed, adrenaline-juiced action and Hollywood style storytelling and narration. All other simulator games tried to duplicate these two styles, but none came even close. Even within the X-Wing series, X-Wing Versus Tie Fighter was considered a disappointment, and X-Wing Alliance was only modestly entertaining.

What separates X-Wing from the rest of the pack are the details. The first thing you’re presented with is a registration desk with a robot behind it. But instead of creating a save file like most simulators, you instead create a pilot file. This creates a level of realism because you can create multiple pilots and can even borrow somebody else’s pilot and stick him in a wingman slot. The better the player did with the pilot, the better the computer will control the pilot as a wingman. It also adds a little bit of realism in that if a pilot gets shot down in a “real” mission, there’s a chance that the pilot might be lost forever as either dead or captured. Thankfully the game offers you the ability to resurrect a downed pilot.

The second thing you see is the inside of your flagship, with three huge hangar doors that take you different parts of the game. Unlike many other starfighter sims, which offer only a handful of training missions, X-Wing offers a wide variety of missions that you can use to hone your skills. First there’s the pilot proving ground, a section that’s vast by itself. You pick a craft and train your ability to adjust your speed and shields and shoot down stationary targets as you struggle to complete ten levels of gates and turrets, with each level having a hundred gates, a decreasing time limit, and increasingly dangerous turrets. Then there’s the historic missions section, where you can take part in non-dangerous sorties that replicate classic encounters with the Empire. But if you feel you’re ready, you can take part in the “real” missions. But instead of a haphazard collection of missions, the missions in X-Wing are grouped into Tours of Duty, with each tour of duty having missions related to each other in some way and having some kind of strategic goal. They all lead up to the classic battle against the Death Star. The only thing that turns me off is that in the game, instead of a vast fleet of X-Wings and Y-Wings like in the movie, it’s just you and your X-Wing.

The gameplay of this game is just unmatched. Even though the graphics are from the days with simple shapes and lighting techniques and the music is rather simplistic midi, the game took advantage of its limited resources and still managed to give you the sensation of being in a Star Wars movie as you hounded swarms of Tie Fighters or escorted Corellian Corvettes. The Tie Fighters follow authentic formations and battle tactics, and the imposing Imperial Star Destroyers are nearly impossible to take down as they spew laser fire all over. The game also has a polished technical side to it. Unlike most starfighter simulators, in X-Wing the difference between a hit and a miss often comes down to one pixel. Just like in the movie, you have to carefully line up your scope to get that perfect shot. You also have to balance different energy levels as you can’t keep shooting like most other games. When you run out of laser shots, you can increase your laser recharge level to gain some back or draw power from the shields to boost your lasers. Increasing the recharge level decreases your engine power, but drawing from the shields takes away your only defense. The shields work the same way as well. You can increase your recharge level at the cost of speed or you can draw power away from your lasers. And just like in the movie, you can even flip your shields to even, double front, or double back. Flying and fighting often involves deciding which area you need the most–lasers, shields, or speed. You can also change your firing pattern, and the X-Wing and B-Wing can lock their S foils closed.

To sum it up, even though this game has outdated graphics and sound and doesn’t offer the “Hollywood thrill” that most other starfighter sims have, it’s still one of the best and most realistic space games ever, and no other game even comes close.

X-WING Collectors’ CD-ROM is still available for sale.  You can get it on Amazone below: